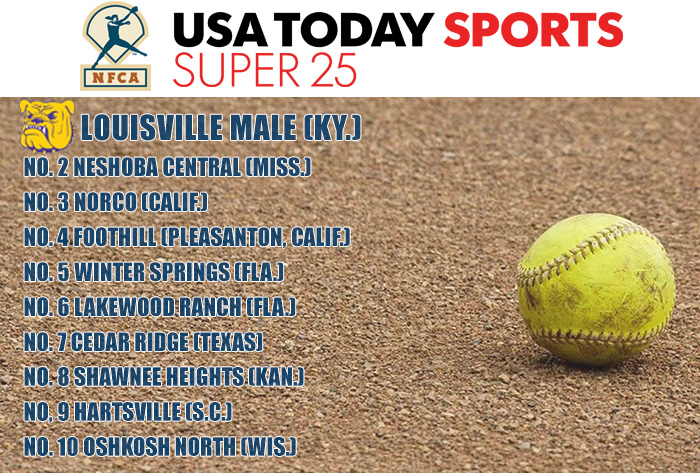 Male (39-0), which outscored its opponents 338-39 this year, leapfrogged both Neshoba Central and Norco in the last ranking of the season. They had much closer games in the state finals, still managed to win all three contests. They beat Boyle County, 4-0, in last Friday’s quarterfinal, then outlasted Clay County, 2-1, in eight innings, in the semis, before defeating Warren East, 6-1, in Saturday’s championship.

Junior Kelsie Houchens struck out nine while tossing a five-hitter in the title game for Male, after twirling a perfect game in the quarterfinal, and retiring all 12 batters she faced in relief in the Bulldogs’ semifinal victory. Tournament Most Valuable Player Jaelyn Sanders hit a three-run homer to provide all the offense the Bulldogs needed in the quarterfinal and doubled twice in the championship, after fanning six over four three-hit innings in the circle in the semifinal. Male has now won 45 of their last 46 games, dating back to May 2018.

Greenwood, which went 44-0 in 2013, recorded the only other undefeated season since Kentucky started playing fastpitch softball in 1995. It is second state title for Male coach Josh Bloomer, who captured the crown in 2012 as the head coach at Mercy.

Elsewhere, Williamsville East (27-0) and Pine Grove (28-0) wrapped up their own unbeaten seasons to force their way into the final Super 25.

The Flames beat Ballston Spa, 3-0, in the Class A final to win their first New York state crown — and the first title in 26 years of coaching for Chris Durr. Sophomore lefty Summer Clark struck out nine in a two-hitter in the final, after tossing an one-hit shutout with 13 strikeouts in their 6-0 semifinal win over Walter Panas.

Williamsville East had to wait for its championship moment, as Ballston Spa needed nearly four hours to knock out previously unbeaten Sayville, 2-1, in 20 innings, in a record-breaking semifinal.

Meanwhile, Pine Grove scored five runs in the sixth to rally from a 3-2 deficit and defeat Bald Eagle Area, 7-3, for its first Pennsylvania state Class 3A crown in just their second title game appearance in school history.

The addition of the two new teams knocked Florida’s Coral Springs Charter and North Carolina’s Eastern Alamance out of the bottom two spots to close the season.