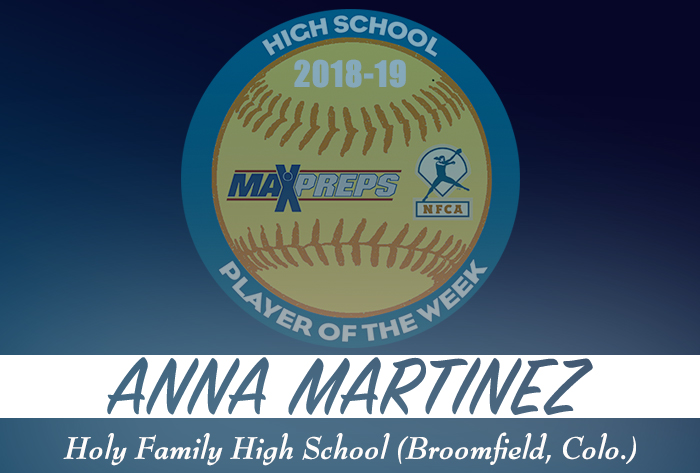 LOUISVILLE, Ky. – Anna Martinez of Holy Family High School (Broomfield, Colo.) was named MaxPreps/NFCA National High School Player of the Week for her outstanding play during the week of Oct. 15-21.

Martinez played a key role in Holy Family’s run to a 2018 CHSAA Class 4A state title. She hit .643 (9-for-14) with three doubles, a home run, six RBI and nine runs scored over the final four games of the season. Martinez recorded four multi-hit contests, slugged 1.071 and recorded a .688 on-base percentage. She capped off her junior campaign with a long ball, three RBI and two runs scored in the title-clinching game against defending state champion Mountain View. Her two-run single in the fourth broke a 3-3 deadlock and gave the Tigers the lead for good. In a 5-1 win over Erie, Martinez doubled twice and scored three times. She added two hits and two runs scored in the 5-1 semifinal win against Silver Creek.