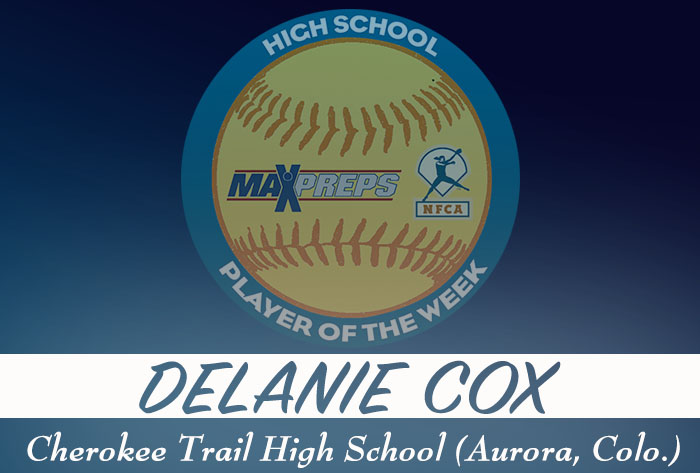 LOUISVILLE, Ky. – Delanie Cox of Cherokee Trail High School (Aurora, Colo.) was named MaxPreps/NFCA National High School Player of the Week for her outstanding play during the week of August 20-27.

Cox powered the Cougars to four wins last week. She hit .846 with 11 hits, including five for extra bases, 15 RBI and 11 runs scored. The senior registered two doubles, a triple, two home runs for a 1.615 slugging percentage. Additionally, Cox reached base safely in her first 15 plate appearances (nine hits, six walks) and finished a four-game stretch with a .895 on-base percentage and no strikeouts in 19 plate appearances.

She started the week with a bang in a 14-8 win over Chaparral, going 4-for-4 with a double, two home runs and eight RBI. She stayed hot at the plate with another 4-for-4 outing (double, two RBI, two runs) against Legend. Cox recorded one hit in her only official at bat versus Frederick as she was walked four times. She capped off the week with two hits and four RBI in a 11-1 triumph over Dakota Ridge.