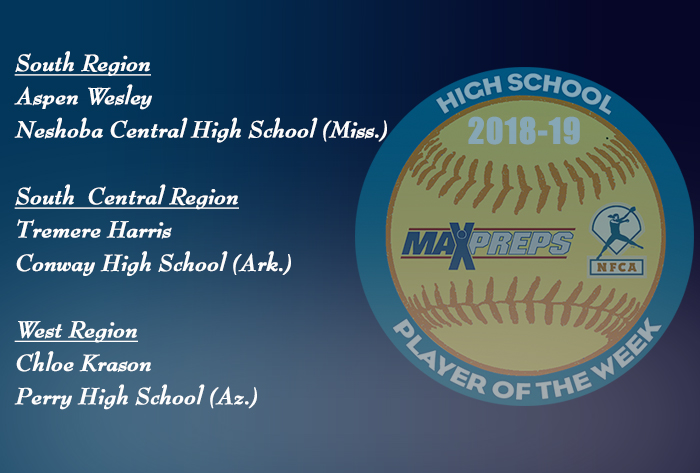 Wesley was nearly unhittable in her two starts last week and has allowed just one hit in her first 21 innings of work this season. She twirled her second perfect game of 2019 in impressive fashion. In a 7-0 win over Lake High School, Wesley fanned all 21 batters she faced on just 79 pitches. The senior righty also twirled a one-hit shutout against Newton County. Wesley struck out 16 and walked one batter in the 4-0 triumph. For the week, she totaled 35 strikeouts to just one walk and held her opposition to an .023 batting average.

Harris opened her 2019 campaign 8-for-9 (.889) at the plate with three doubles and home run, six RBI, five stolen bases and five runs scored in two wins for the Wampus Cats. The junior outfielder recorded four hits, three doubles, three RBI and two runs scored in a season-opening win against Van Buren. Harris continued her hot start with a 4-for-4, three RBI, three runs scored outing against Maumelle. She also homered and swiped two bases against the Hornets. For the week, she slugged 1.555 and posted a 2.445 OPS.

Krason was nearly perfect at the plate, going 9-for-10 with seven extra-base hits, seven RBI and six runs scored. Helping the Pumas to a 2-1 week, she doubled four times, tripled and launched two home runs, which attributed to her 2.100 slugging percentage. Krason opened the week 3-for-4 with a double, both long balls, five RBI and four runs in a 12-0 defeat of Kofa. The senior shortstop went 3-for-3 in her final two contests against Mountain Pointe and Queen Creek. Krason recorded a pair of doubles, a triple and two RBI in an 8-1 win over the Pride.