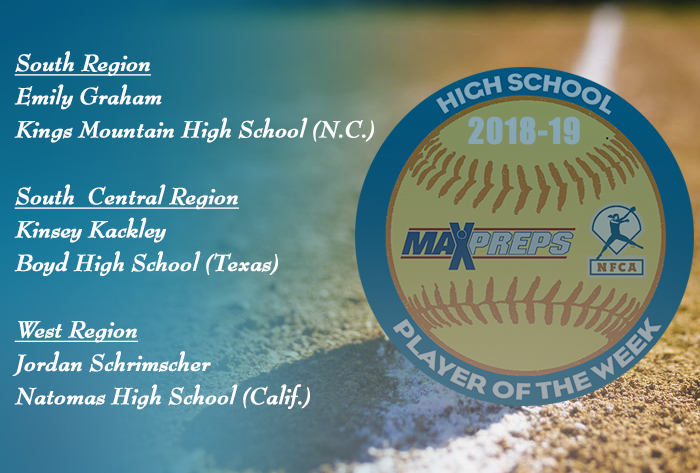 Graham was a perfect 7-for-7 in her first two games of 2019. The senior third baseman was 3-for-3 with two homers, five RBI and three runs scored against Stuart Cramer. In her second game of the season, she nearly hit for the cycle with two doubles and a triple versus Polk County. Graham was 4-for-4 with seven RBI and three runs scored against the Wolverines. For the week, she finished with 12 RBI, six runs and a 2.428 slugging percentage.

Kackley tossed two no-hitters and struck out 40 in her two starts last week. She fanned 20, walked two in a 4-0 win over Plano East. She also helped herself out at the dish, going 3-for-3 with a double, two RBI and a run scored. Two days later, Kackley struck out 20 more batters with zero walks against Grenville. Only one Lion reached base courtesy of a hit batter. The sophomore righty’s back-to-back 20 K outings were a season high and brought Kackley’s 2019 total to 267 in 112 innings.

Schrimscher hit .917 (11-for-12), scored 12 runs and recorded four triples helping the Nighthawks start the season 3-1. The junior shortstop reached base safely in 14 of her 15 plate appearances (.933 OBP) and slugged 1.583. Schrimscher opened 2019 with a 5-for-5 outing against Leroy Greene Academy. She scored four times, tripled and drove in two runs versus the Lions. She was 3-for-3 with three triples, four runs scored and two RBI versus Aspire Langston Hughes Academy. Additionally, Schrimscher picked up a win in relief against Florin, tossing two innings of shutout ball with three strikeouts.