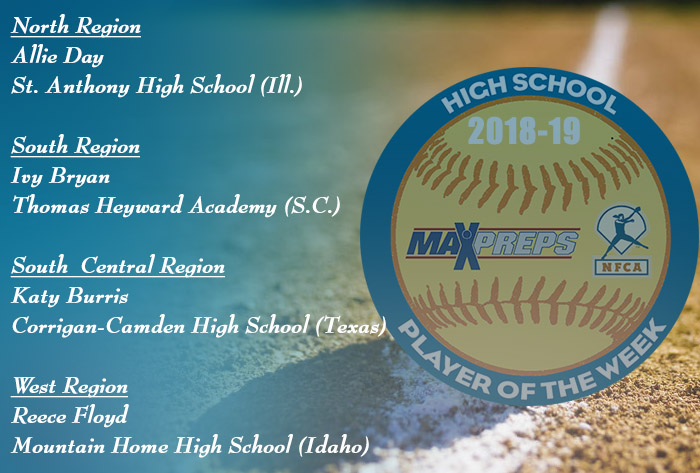 Day started the 2019 campaign by hitting .875 (7-for-8) with three doubles, two home runs, seven RBI and six runs scored in two wins for the Bulldogs on opening day. The junior homered and scored three runs in each contest. Day was 4-for-4 with four RBI versus Clay City and 3-for-4 with a pair of doubles and three RBI against Hutsonville/Palestine.

Bryan hit .889 (8-for-9) with three home runs, a triple, seven RBI and seven runs scored, leading the Rebels to wins over Beaufort and Beaufort Academy last week. Slugging 2.111 for the week, she finished 5-for-5 with two longballs, three RBI and four runs scored versus Beaufort. The senior infielder registered three more hits, which included a homer and a triple, while driving in four runs and scoring three times against the Eagles.

Burris helped the Bulldogs to a pair of wins over Newton and Hemphill with her arm and her bat. The senior hurler twirled a pair of one-hit shutouts with 34 strikeouts, while going 5-for-8 at the dish with five RBI and three runs scored. Against Newton, Burris fanned a season-high 19 and did not issue a walk. Additionally, she collected a season-best four hits, a double, home run, three RBI and three runs versus the Eagles. Burris struck out 15 more batters and walked one in an 8-0 win over Hemphill, while also registering two RBI.

In her first three games of the season, Floyd keyed the Tigers to a pair of wins over Kimberly and another over Buhl. The freshman was nearly perfect, going 9-for-10 at the plate with four doubles, nine RBI, 10 runs scored and a 1.300 slugging percentage. Against Buhl, Floyd was 4-for-4 with a pair of doubles, three RBI and three runs scored. She posted three hits a double, and three runs in the opener against Kimberly and followed that with four RBI and four runs in game two.