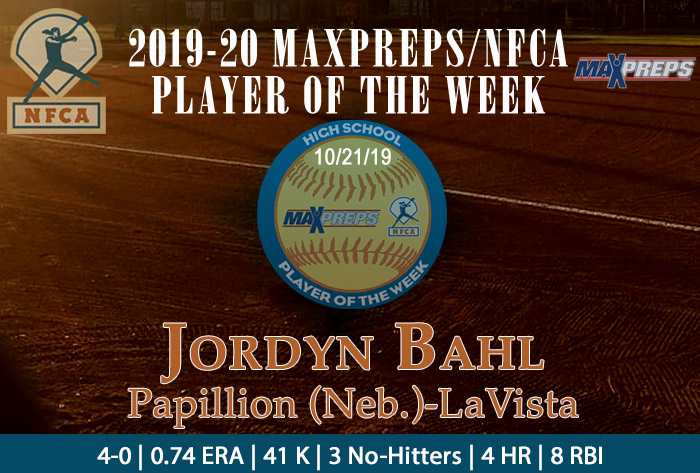 LOUISVILLE, Ky. – Jordyn Bahl of Papillion (Neb.) La Vista High School was named MaxPreps/NFCA National High School Player of the Week for her outstanding play during the week of Oct. 14-20. It marks the junior hurler’s second honor this season after keying the Monarchs to a 36-0 season and Nebraska School Activities Association (NSAA) Class A state title.

Over the weekend, Bahl was 4-0 in the circle, tossing three no-hitters and striking out 41 in 19 innings of work. She surrendered two runs on four hits, posted a 0.74 ERA and issued five walks. At the plate, Bahl hit .583 with two doubles, four home runs, eight RBI and 1.750 slugging percentage.

In wins over Millard West, Gretna and Elkhorn, Bahl fanned nine, 10 and 11 batters respectively, twirling a four-inning perfect game against their quarterfinal opponent, Gretna. Against the Dragons, she also connected on two long balls and drove in three runs. In the title game, Bahl was 3-for-4 with both doubles, a home run and three RBI. She fanned 11 more batters, allowing two runs, four hits and two walks in Papio’s second straight run-rule win over Elkhorn.