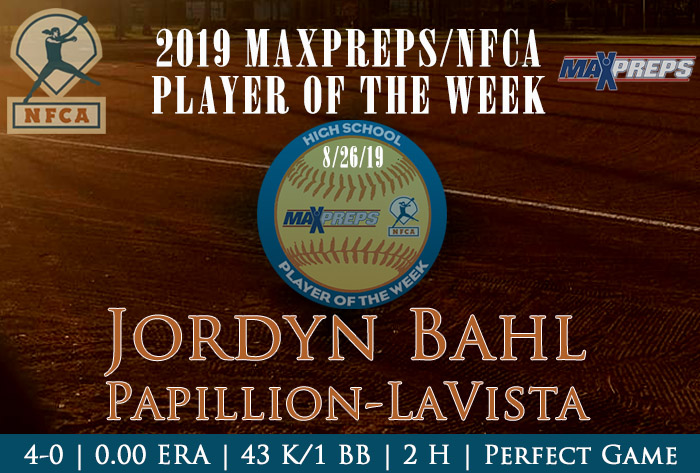 LOUISVILLE, Ky. – Jordyn Bahl of Papillion (Neb.)-LaVista High School was named MaxPreps/NFCA National High School Player of the Week for her outstanding play during the week of August 19-25.

Bahl posted stellar numbers, which included a perfect game, from the circle during a 5-0 week for the Monarchs. The junior hurler was 4-0 with a 0.00 ERA and 43 strikeouts in 20 innings of work. Bahl limited her opposition to an unearned run, two hits, a walk and an .031 batting average.

She fanned 10 and did not allow a base runner in a five-inning perfect game against Papillion-LaVista South. Twenty-four hours later, Bahl held Elkhorn to no hits with a week-high 13 strikeouts in six innings of work. She went the distance in a six-inning victory over Millard North, allowing a run on one hit and striking out 12. She also added eight more punchouts in a three-inning outing versus North Star. Additionally, Bahl helped out with her bat, hitting .385, with a double, home run and eight RBI.