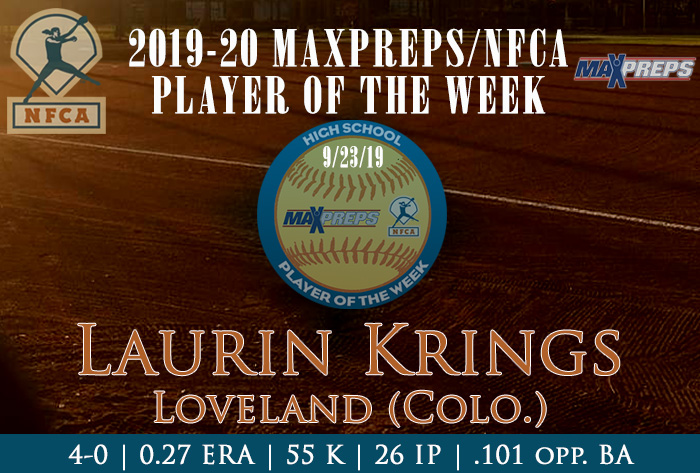 LOUISVILLE, Ky. – Laurin Krings of Loveland (Colo.) High School was named MaxPreps/NFCA National High School Player of the Week for her outstanding play during the week of Sept. 16-22.

Krings went 4-0 with a 0.27 ERA and 55 strikeouts in 26 innings of work. She scattered nine hits, allowed three runs, one earned, walked three and held her opposition to a .101 batting average. In her first start of the week, Krings twirled a five-inning no-hitter with nine punchouts against Horizon. The senior righty recorded a three-hit shutout with 15 strikeouts and two walks in a 3-0 victory over Rocky Mountain. She sat down 16 and 15 batters in triumphs over Broomfield and Poudre, respectively. At the plate, Krings ended the week homering in three straight contests, including the game-winning fifth-inning two-run long ball in a 3-2 win versus Broomfield.