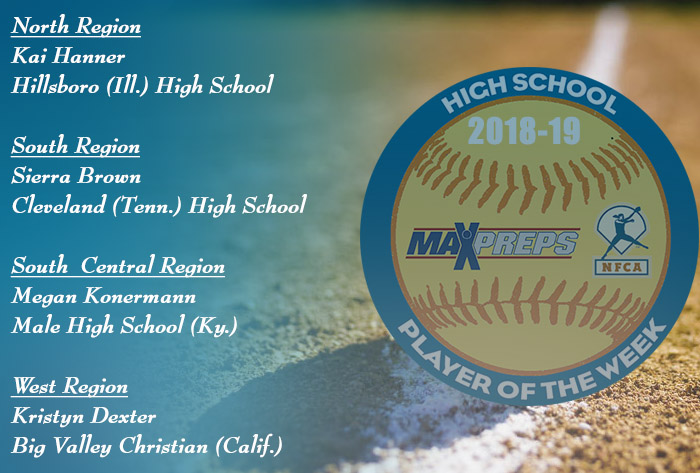 Brown slugged an eye-popping 2.333 with four home runs and 15 RBI for the Blue Raiders. She registered back-to-back four-hit, two-homer, seven RBI performances versus McMinn County and Bradley Central. She also doubled against McMinn County, came around to score four times versus Bradley Central and scored twice in a win over McMinn Central.

Konermann, who had a monstrous opening weekend for the Bulldogs, launched three home runs, recorded 12 RBI and slugged 2.000 over four games. She went 3-for-3 with three runs scored against Jeffersonville and John Hardin, launching all three of her round trippers and driving in eight runs versus the Red Devils. Konermann tripled and recorded two RBI in a win over Butler and added a double and run scored versus Boyle County.

Dexter paced Big Valley Christian at the plate and in the circle last week. The senior was a perfect 8-for-8 with five doubles, a home run, 15 RBI, five runs scored and a 2.000 slugging percentage. In the circle, Dexter was 2-0 with a 0.00 ERA, 21 strikeouts and four walks. She surrendered an unearned run on three hits. Against Delta Charter, she went 5-fo-5 with three doubles, eight RBI and four runs scored, while tossing a three-hit shutout and striking out 10. Dexter twirled a no-hitter with 11 strikeouts versus Modesto Christian. At the dish, she drove in seven runs on two doubles and a long ball.