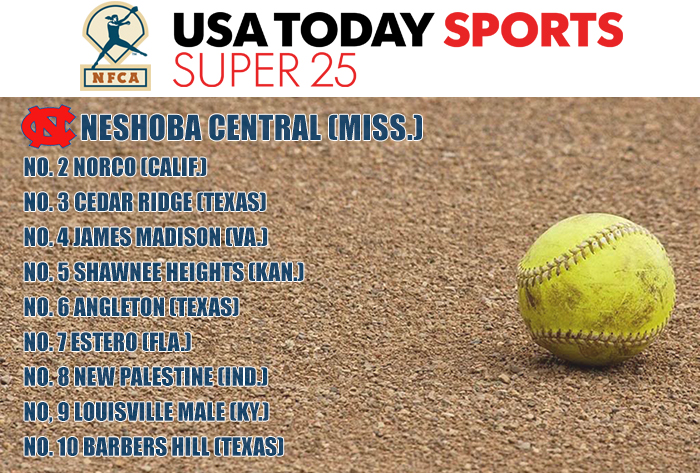 LOUISVILLE, Ky. — Neshoba Central was idle this week, but maintained its status as the No. 1 team in the USA TODAY Sports/NFCA High School Super 25 poll.

The (21-0) Rockets, who have won 60 straight games dating back to May 2017, return to action today with a home game against Cleveland Central. They have now been the top team in the nation for 14 consecutive weeks.

Meanwhile, Norco (24-0) remained No. 2 after winning the Michelle Carew Classic on the strength of a pair of one-run wins over Los Alamitos and Orange Lutheran on the final day, and then Tuesday’s 3-0 shutout of King. Third-ranked Cedar Ridge (24-0) kept pace with a 2-0 victory over Hendrickson.

Elsewhere, Kentucky’s unbeaten Louisville Male (15-0) continued its climb up the rankings, moving up two more spots this week to ninth after collecting seven wins over the past week to complete a perfect 8-0 Alabama spring break trip. On that trip, the Bulldogs outscored their opponents 87-16.

The other mover this week is unbeaten Immaculate Heart Academy (4-0), which moved up to No. 20 after capturing its bracket of the inaugural NFCA New Jersey Leadoff Classic over the weekend in Newark, N.J. The win was fitting, since the tournament was honoring the memory of the Blue Eagles’ longtime coach Anthony LaRezza, who died in February 2016.