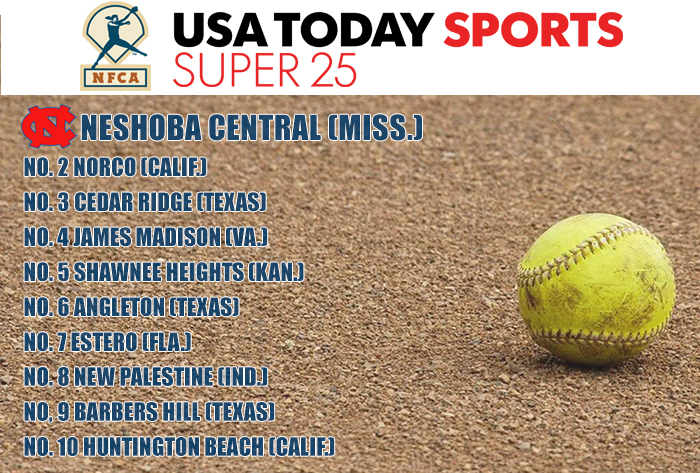 The (12-0) Rockets outscored their last three opponents by a combined 41-3. They put their 51-game win streak on the line later today against Ethel, a team they defeated 3-0 on March 5.

Meanwhile, undefeated Norco (16-0) moved into the No. 2 spot this week after a pair of victories, and Cedar Ridge (15-0) continued its winning ways — beating three previously-unbeaten teams — to jump to third, ahead of two-time reigning Virginia state 6A champ James Madison, which doesn’t open it season until March 26.

Back-to-back Kansas state 5A titlist Shawnee Heights (opening April 5) stayed fifth, while unbeaten newcomers Angleton (18-0) of Texas and Estero (12-0) of Florida jumped into the mix this week at Nos. 6 and 7, respectively.

The other new team in this week’s poll, Barbers Hill (22-1) of Texas, is riding an 18-game win streak, while California’s Huntington Beach (9-0), fresh off its 7-0 victory over Los Alamitos on Tuesday, moved into the top 10.

Losses bounced Idaho’s Eagle and Arizona schools Hamilton and Pinnacle out of the rankings.