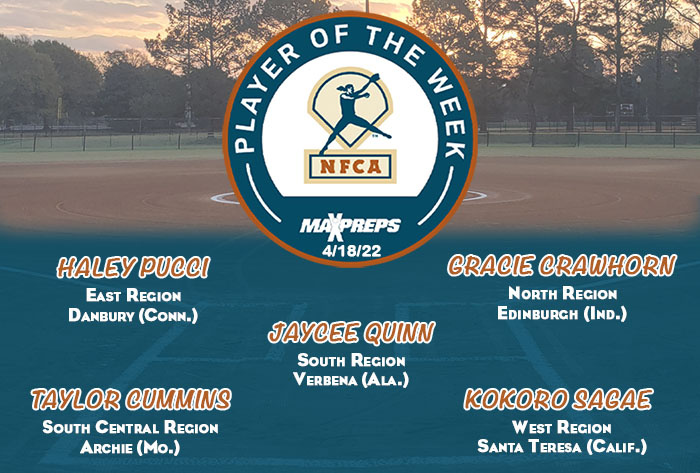 Pucci was nearly unhittable in her two complete game wins last week. She twirled a no-hitter in an 8-1 win over Immaculate, striking out 17 and walking three. Pucci followed up with a one-hit shutout against New Canaan in which she fanned 18 and issued one walk. For the week, she held her opposition to a .023 batting average. Pucci also went 3-for-3 with a home run, three RBI and three runs scored versus Harding.

Crawhorn was a perfect 10-for-10 at the dish with six home runs, 13 RBI and 11 runs scored. She also doubled, drew a pair of walks, posted a 1.000 on-base percentage and slugged 2.900. Homering in all three contests, she capped off the big week with three long balls, a double and eight RBI in an 11-5 victory over Brown County. Crawhorn left the yard twice and scored four times in a game-two win over South Decatur.

Lifting Verbena to a 6-0 week, Quinn hit .778 (14-for-18), drove in 16 runs and recorded five multi-hit contests. The sophomore registered a season-best five RBI in both ends of a doubleheader against Notasulga, homering and scoring three times in game one. Quinn also scored three times in game two against Loachapoka and versus Billingsley. She finished the week with 13 runs scored, six doubles, one home run, a 1.333 slugging percentage and did not strikeout in 22 plate appearances.

Cummins hit .778 (7-for-9) with a double, two triples, 11 RBI and seven runs scored. She slugged 1.333 and reached base at a .800 clip. Cummins, a senior, opened the week with a four-RBI performance against Rich Hill. She drove in four more runs and tripled against Kingsville. Cummins added a 3-for-3 outing with a double, triple, three RBI and three runs scored against Windsor.

Sagae hit .824 (14-for-17) with three doubles, three triples, four home runs and 12 RBI. She posted a 2.058 slugging percentage and four multi-hit contests. She went 5-for-5, homered twice and recorded a season-high six RBI in a win over Leland. Sagae added a long ball and three RBI in victories over Branham and North Monterey County.