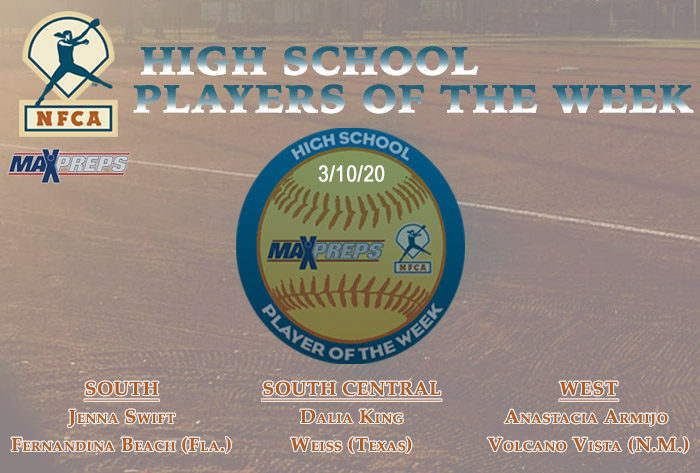 Swift enjoyed a week in which she hit. 800 (8-for-10) with two doubles, a triple, 10 RBI and six runs scored. She recorded an .833 on-base percentage and slugged 1.200. Swift reached base safely in all four plate appearances against Cedar Creek Christian with a double, triple, five RBI and two runs scored. She posted a 4-for-4 outing versus Seacoast Christian Academy, driving in four runs and scoring three times.

King hit .875 (7-for-8) with three home runs and slugged 2.250 in a pair of games last week. The sophomore also tripled and recorded 12 RBI. She was 4-for-4 with all three long balls and nine RBI in a 19-5 win over Manor New Tech. King finished 3-for-4 with a triple, three RBI and two runs scored against Bastrop.

Armijo recorded nine hits in 11 at bats (.818), doubled twice, homered three times and drove in 11 runs. She scored eight times and slugged 1.818 as her squad won the first three games of the season. Registering three hits in each contest, Armijo hit two long balls and scored three runs in the season-opening win against Los Lunas. She doubled, homered, knocked in four runs and scored three more times in game two versus Las Cruces. The sophomore added three more RBI with a double in game one against the Bulldawgs.