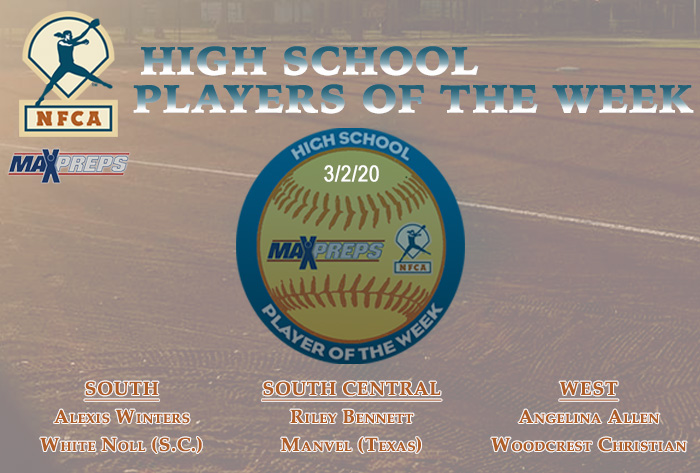 Winters was 6-for-8 (.750) at the plate with four home runs, eight RBI and seven runs scored. She slugged 2.375 and registered a .778 on-base percentage. Two of her long balls, along with two RBI and two runs came in a 7-3 win over Lugoff-Elgin. She homered and drove in four runs against West Ashley. Winter added a double, home run with two RBI and three runs versus Lexington.

Bennett went a perfect 11-for-11 with a double, three homers and nine RBI over four games last week. The junior recorded three hits three times and a perfect 1.000 on-base percentage (two walks). Bennett was 3-for-3 with two long balls, four RBI, three runs and two walks against Shadow Creek. She added three hits, two RBI and a homer in game one versus Harleton. Bennett registered two more RBI and a double against Fort Bend Kempner.

Allen was a perfect 15-fo15 at the dish with 15 RBI and 12 runs scored. She slugged 2.000 with seven doubles, a triple and two home runs. Allen posted three four-hit games, drove in at least three runs and recorded two-plus extra-base hits in each contest. The junior doubled three times, homered and drove in four against Arroyo Valley. She registered two doubles and three RBI in wins over Bethel Christian and Bloomington Christian. Allen capped off her week with a triple, long ball, five RBI and four runs scored against Excelsior Charter.