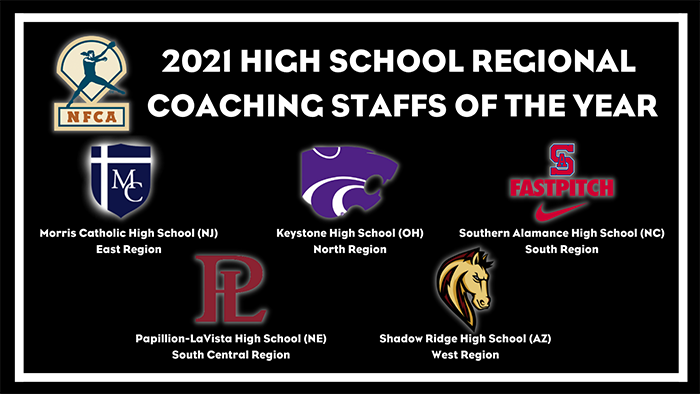 LOUISVILLE, Ky. – Five high school programs were selected by their peers as the NFCA Regional Coaching Staffs of the Year, the Association announced on Friday.

Captured its fifth OHSAA Division II state championship in its sixth straight finals appearance … Finished ninth nationally in the USA Today Sports/NFCA High School Super 25 Poll … No. 1 seed in state tournament and won the title with a 7-3 victory over No. 2 seed Triway … Posted a 33-1 record … During the 2021 campaign, Keystone became the first program in state history to win 1,000 games … Coach Piazza earned his 500th win in 2021 and finished with 514.

Won the NCHSAA 3A state championship, the eighth in program history … After dropping the opening game of the state championship series, the Patriots regrouped and topped Alexander Central 3-0 (no-hitter) and 11-3 to capture the title … Finished 2021 with a 17-4 record.

Steered program to its second consecutive NSAA Class A state title … Finished 36-0 and No. 1 in the NFCA’S Fall High School Top 25 Coaches Poll … Eight players from the 2020 squad have gone on to play college softball … Under Petersen’s tutelage, Jordyn Bahl was named the first-team NFCA All-American and the National Gatorade Player of the Year.

First-year coaching staff that inherited a program that graduated 10 seniors … Guided team to a region championship and the AIA state semifinals … As the No. 11 seed, the Stallions won their first-ever state playoff game, a 1-0 victory over Desert Vista and followed with an upset of No. 3 see Queen Creek, 5-3 … Finished 2021 with a 15-7 record and the best finish in school history.