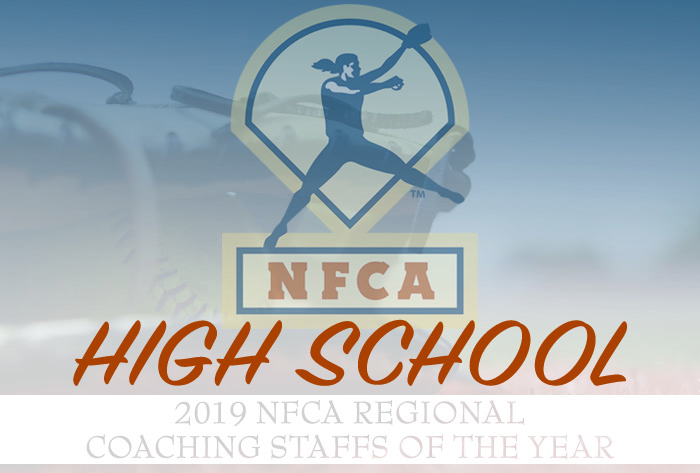 LOUISVILLE, Ky. – The NFCA announced its 2019 High School Regional Coaching Staffs of the Year. Five prestigious programs from their respective NFCA regions were chosen for the honor.

These schools are now eligible for the national award, which will be announced on August 23.

Steered Donovan Catholic to a 30-2 mark, No. 1 state ranking and the No. 17 spot in the USA Today Sports/NFCA High School Super 25 Poll … Under her watch, the Griffins won the class "B" South, South Jersey Parochial A State and overall Parochial A State Championship… Capped off 2019 by defeating all group state champions and capturing the New Jersey Tournament of Champions.

Guided New Palestine to a 29-3 record and its third straight state championship… It was the first three-peat in Indiana High School softball history…  Finished No. 11 in the USA Today Sports/NFCA High School Super 25 Poll.

Back-to-back FHSAA 2A state champions… Finished 2019 with a 19-7 record… First Pasco County program and just the third area school to win consecutive state titles… 10 of 19 victories came via the run rule… 22-1 against 2A programs the last two seasons, outscoring those opponents, 231-13.

Posted a 39-0 mark and won the 2019 KHSAA state championship… Finished No. 1 in the USA Today Sports/NFCA High School Super 25 Poll… On their way to the title, the Bulldogs outscored their opponents 341-39 and scored the most runs in a single season by a Jefferson County Public School fastpitch program… Additionally, the season included the largest run differential per game, fewest runs allowed per game, and most runs scored per game for a KHSAA state champion since 2002.