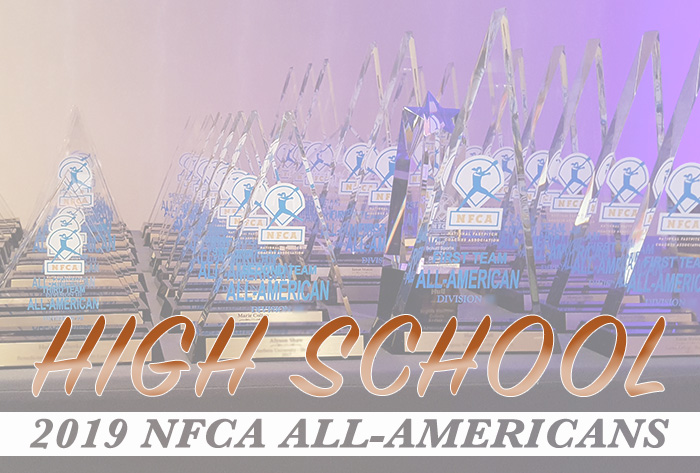 The NFCA High School All-America teams are selected by a committee of member head coaches from the pool of players who earned first-team All-Region recognition in the five high school regions. The three 16-member squads had representation from 20 different states.

Supple, a three-time state Gatorade Player of the Year, posted a perfect 29-0 record with a 0.75 ERA and led her squad to its WIAA Division I state title and an unbeaten season. The 2019 MaxPreps Player of the Year struck out 298 batters to just 12 walks in 167 innings of work.

Dowling, a member of the Team USA’s U-19 National Team, took home state player of the year honors for the second straight season. Hitting .674 with 22 home runs and 47 RBI, she led the Spartans to a Class 2A section semifinals. She drew 31 walks to post a .760 on-base percentage and slugged 1.495, both attributing to her 2.237 OPS.

A pair of three-time All-Americans – Oaks Christian School’s (Westlake Village, Calif.) Maya Brady and Spain Park’s Maddie Majors – also took home first-team accolades. For Brady, it is her first time as a first-team selection, while Majors earns her second straight first-team nod after a second-team honor in 2017.  Brady, a senior shortstop, hit .558 with 12 home runs, 32 RBI, 36 runs scored, a 1.799 slugging percentage and .657 on-base percentage. Majors, who roamed the outfield for the Jaguars, batted .448 with 14 doubles, 10 home runs, 69 RBI and 36 runs scored. The senior slugged .779 and registered a .448 on-base percentage.