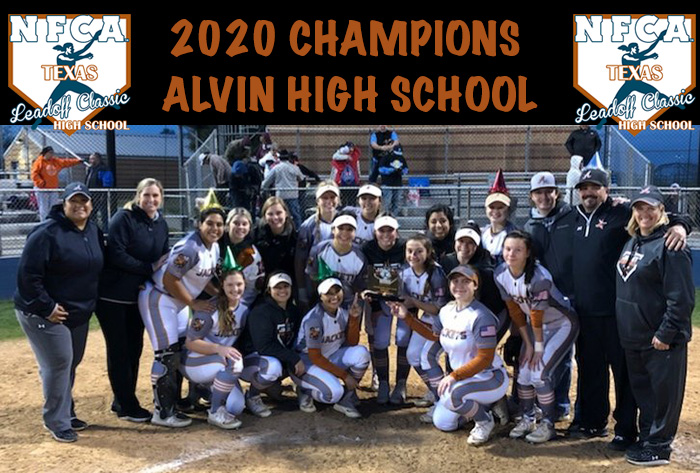 LOUISVILLE, Ky. - Alvin High School took home the 2020 NFCA Texas Leadoff Classic title with a 3-1 triumph over Brazoswood High School on Feb. 22 in Bryan, Texas. The Lady Yellowjackets topped a field of 64 teams to win the second edition of the tournament, which was renamed after the NFCA partnered with Bryan High School head coach Enrique Luna, who has now been hosting the previously-named Bryan-College Station Tournament for 24 years. Luna is currently serving on the NFCA Board of Directors as the High School representative.

Semifinalists Fort Bend and Kingwood battled for third place with the latter Mustangs coming out on top, 4-1. After dropping its first game, Douglas San Antonio MacArthur marched through the consolation bracket with triumphs over Incarnate Word, Cypress Ranch, East Central and Southwest.

The main bracket featured 64 programs, while a round-robin segment highlighted 26 more teams. The 2021 edition of the NFCA Texas Leadoff Classic returns to the same site, Feb. 18-20.