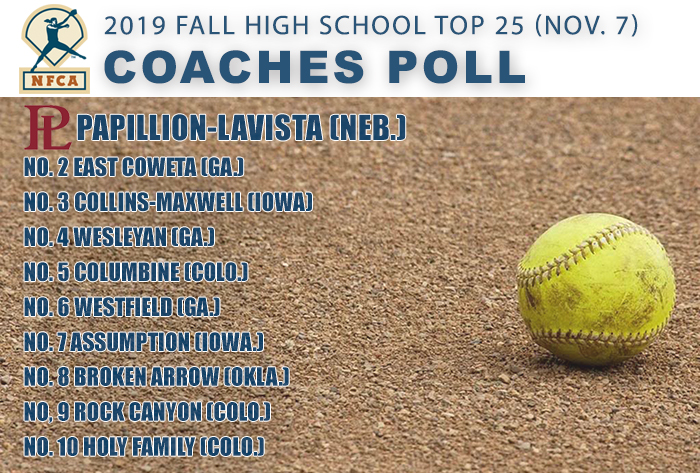 The (36-0) Monarchs ascended to the throne last week, ending East Coweta’s run of nine straight weeks at the No. 1 spot. Papillion-LaVista captured its second Nebraska Class A championship in the last three years three weeks ago. It was also the Monarchs’ fifth consecutive appearance in the state final.

East Coweta (33-2), meanwhile, was also idle this week after closing its season with an 8-2 loss to Peachtree Ridge on Oct. 25. The Indians were stunned by eventual Class 7A titlist Mountain View, 1-0 in eight innings, the previous day. Despite the disappointing finish, though, the Indians were a remarkable 101-4 over the last three seasons with two state championships during that span.

Meanwhile, in the only state yet to wrap up its fall season, Blue Springs South (20-6) captured its second-straight Missouri state Class 4 championship, replacing the team it defeated, Raymore-Peculiar, in the rankings to return to the Top 25 for the first time in nearly a month.

Louisiana commit Addie Lightner, this week’s MaxPreps/NFCA High School Player of the Week, tossed a five-hitter in the Jaguars’ 10-0 rout of Raymore-Peculiar in Saturday’s final after retiring the final 15 batters and hitting a two-run double in a 3-2 victory over Rock Bridge in the semifinals. It was Blue Springs South’s fourth straight trip to the state championship game.