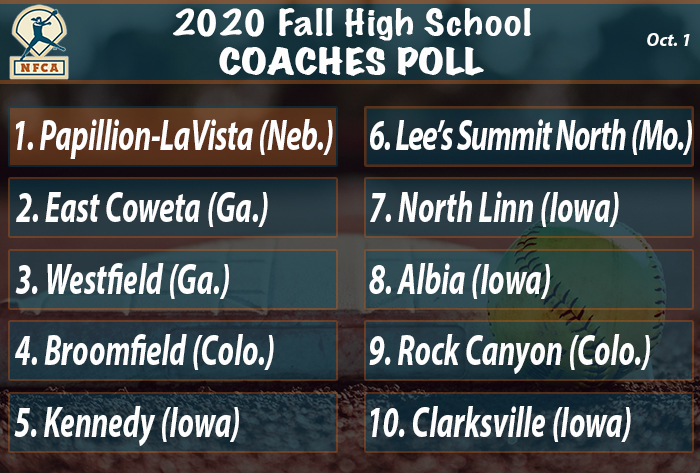 University of Oklahoma commit Jordyn Bahl fanned 19 and tossed a no-hitter in last Saturday’s 3-1 victory over No. 6 Lee’s Summit North, and the reigning Nebraska state champion (28-0) Monarchs followed that up on Monday with their 64th-straight victory, an 8-0 win over Lincoln North Star. Bahl struck out 13 in a five-inning one-hitter.

The strong-showing loss to Papillion-LaVista was the only blip on the radar for Missouri’s Lee’s Summit North (15-2), which quickly rebounded to rout Millard North, 12-0, to split its Saturday in Nebraska. The Broncos then blanked Liberty North, 3-0, on Tuesday to close a strong 3-1 week, which started with a 10-0 rout of Lee’s Summit West last Thursday, and remain sixth. Cierra Harrison, who struck out five in a four-hitter against the top-ranked Monarchs, combined with Kiara Sodini on a perfect game versus Millard North, and then fanned 13 in Tuesday’s triumph.

Second-ranked East Coweta (21-1) and No. 3 Westfield (17-1) kept winning in Georgia, Broomfield (14-1) continued to be the top ranked team in Colorado, and Iowa’s Kennedy also stayed put to round out the first five.

Elsewhere, Oklahoma’s Coweta (27-3) split a pair of rescheduled games with Prior to snap a 24-game win streak, but won two other games, to stay right on Lone Grove’s tail — both looming just outside the top 10.