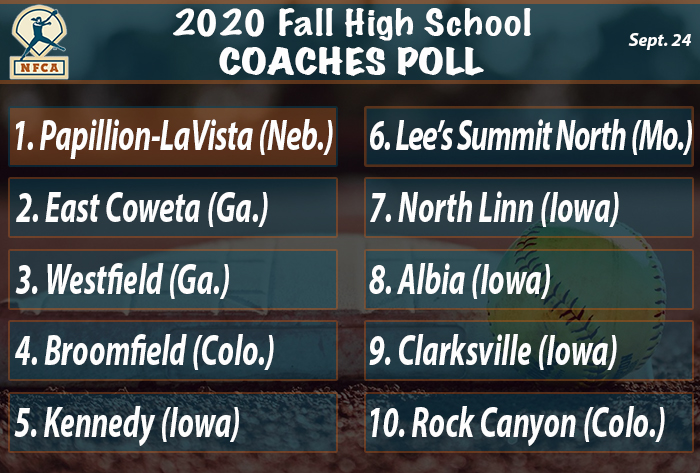 The reigning Nebraska state champion (26-0) Monarchs captured their own invitational tournament last weekend, and have now won a state-record 62 straight games. Papillion-LaVista will get maybe its best test of the season when it hosts No. 6 Lee’s Summit North (12-1) on Saturday in a matchup of top-10 teams.

Meanwhile, East Coweta (19-1) won five more games, but shockingly lost 8-0 to new No. 23 North Gwinnett (16-3) last Friday in the Grayson Tournament. The Indians rebounded to win three straight and hold onto the No. 2 ranking, but two unbeaten teams are looming below them, should they falter again.

Those two teams — fellow Georgia school Westfield (16-0) and Colorado powerhouse Broomfield (13-0) — were the primary beneficiaries of rough weeks for Oklahoma’s Edmond Memorial (three losses) and Southmoore (two defeats), which dropped the (23-4) Bulldogs to 20th and bounced the Sabercats out of the Top 25 for the time being.

Newcomers this week include Oklahoma’s Lone Grove (22-2) and Coweta (24-2), who have combined to win their last 32, and Nebraska’s Hastings (19-1), which defeated then-No. 12 Skutt Catholic, 8-4, on Saturday in the final of the Hastings Invite and has been rolling since a Sept. 3 road loss to North Platte.