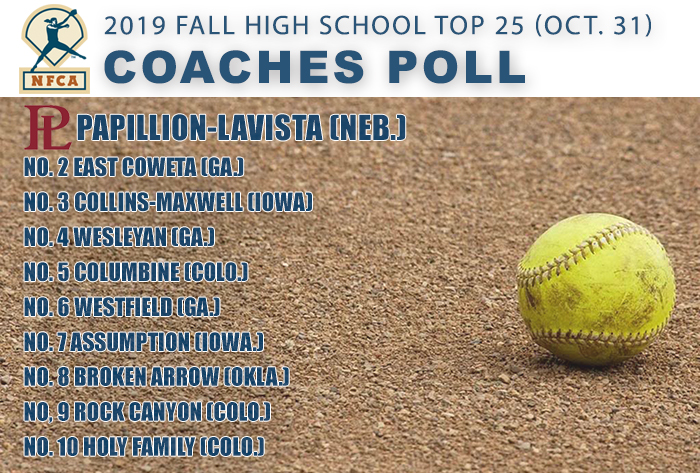 The (36-0) Monarchs ascended to the throne for the first time, ending East Coweta’s run of nine straight weeks at the No. 1 spot. Papillion-LaVista captured its second Nebraska Class A championship in the last three years two weeks ago. It was the Monarchs’ fifth consecutive appearance in the state final.

East Coweta (33-2), meanwhile, suffered as many losses last week — two — as it has had in the last two previous seasons combined. After edging Parkview, 4-3 in 10 innings, last Thursday, the Indians were shocked by eventual Class 7A titlist Mountain View, 1-0 in eight, later that night. An 8-2 loss to Peachtree Ridge on Friday closed their season and ended a three-year run during which they went a remarkable 101-4.

Wesleyan (31-2) slipped one spot to fourth after falling to Georgia Class A private champion Mount de Sales twice last week. The Wolves lost 4-2 in their elite eight opener and then 2-0 in the title contest, after winning three games to earn the rematch.

Elsewhere, Columbine (25-2) moved up to No. 5 after capturing the Colorado state 5A crown, beating two-time defending titlist Legend in the quarterfinals on Friday; No. 6 Westfield (24-2) claimed the Georgia Independent School Association tournament; and Banks County (31-3) is now 19th after winning the Georgia state Class AA championship.

Erie (16-7) returned to the rankings this week at No. 21 after outslugging Golden, 13-9, in Saturday’s Colorado state Class 4A final.