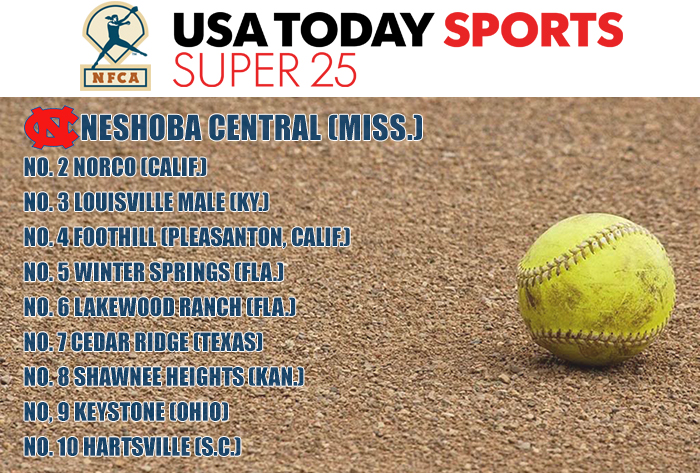 Neshoba Central and Norco are both finished for the season, but have several active teams nipping at their heels, especially No. 3 Louisville Male (35-0), which won its sixth regional title in seven years on Tuesday.

The Bulldogs, who have outscored their opponents 321-37 this season, have 24 wins in which they have held the opposition under two runs, and 19 victories by double digits, play Oldham County in Saturday’s Kentucky semistate round.

Fourth-ranked Foothill (28-0) beat Heritage in their California section final, while fellow unbeaten Winter Springs (31-0) leapfrogged Lakewood Ranch (30-1) into the No. 5 spot after dealing the Mustangs their lone loss of the season in the Florida state 8A final.

Elsewhere, eighth-ranked Shawnee Heights (22-1) wrapped up its third-straight Kansas 5A title by avenging its only loss with a 12-1 victory over Bishop Carroll, and No. 12 New Palestine (26-3) moved up one place this week after capturing its third straight Indiana 3A regional crown.

New teams in the poll this week are Ridgeview (18-1), Jackson (28-2) and Eastern Alamance (23-2). No. 17 Ridgeview plays Dallas in Saturday’s Oregon 5A state final, while 18th-ranked Jackson won four games last Saturday to repeat as Washington 4A champion, and No. 25 Eastern Alamance (23-2) faces Central Cabarrus on Friday in the first game of the North Carolina 3A state finals.