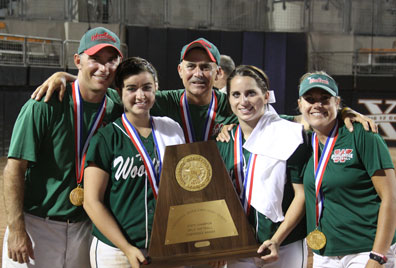 STARKVILLE, Miss. – Head coach Richard Jorgensen and assistant coaches Tim Borths and Paula Miller of The Woodlands (Texas), have been named as the 2011 NFCA High School National Coaching Staff of the Year, the association announced on Thursday.

The Highlanders won their first Texas Class 5A state title this year by beating Northside O’Connor 7-5 in the championship game. The Woodlands ended its dream season at 44-1, with the only loss of the year coming to Tomball in a best-of-three regional finals series, which Woodlands won two games to one.

Helping lead the Highlanders on the field this season was pitcher Paige McDuffee. McDuffee, the 2011 Gatorade National Player of the year, went 37-1 in the circle in 2011 and finished the season with a 0.97 ERA, 244 strikeouts and an opponent’s batting average of just .159.

For their accomplishments this season Jorgensen and his staff were also named as the South Central Region Coaching Staff of the Year.

The Vikings turned in a 23-1 performance on the year and won the New York Class A Championship with 1-0 victory over King’s Park in the title game. Pittsford Mendon got a huge boost in the state semi-finals and championship game from pitcher Brittany Gage who struck out 12 and tossed a no-hitter in each game. On their way to the state title, theVikings claimed the Section V Class A1 championship for the second year in a row.

Carmel won the Indiana Class 4A state title in 2011 and capped off their 28-2 record by ending the season on a 10-game win streak. The Greyhounds won the state title via 1-0 eight-inning victory over Avon in the championship game. Carmel received votes in the final USA Today/NFCA High School Top 25 poll of the season and had outfielder Kelsi Jones named to the 2011 Louisville Slugger/NFCA All-America second team.

The Eagles went 28-4 this past season and finished the year ranked fifth in the final USA Today/NFCA Top 25 poll. Niceville capped their season by winning the Florida Class 5A state championship with a 2-1 victory over sixth-ranked Bartow. The Eagles proved why they are among the nation’s elite in the state tournament by out-scoring their opponents 33-4 over the five game stretch. Niceville also earned national recognition earlier this summer when had outfielder Stephanie Hartness selected as a 2011 Louisville Slugger/NFCA Second team All-American.

The Panthers ended their 2011 campaign with a record of 26-5 and ranked 20th in the final USA Today/NFCA Top 25 poll. Despite starting the season 11-5, the Panthers rode a 15-game win-streak all the way to their sixth straight New Mexico Class 4A state crown that they captured by beating cross-town rival Farmington, 5-0, in the title match-up. Pitcher Karysta Donisthorpe, a 2011 Louisville Slugger/NFCA Second Team All-America selection, helped fuel the title run by tossing two no-hitters in the state tournament and fanning 16 in the championship game.