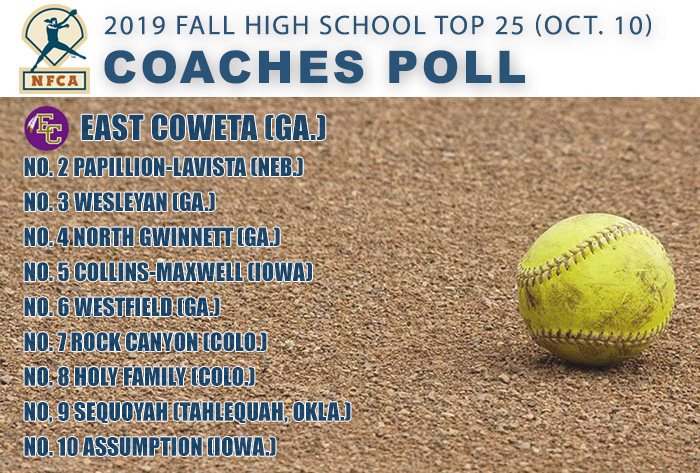 East Coweta (30-0) shook off a regional scare and cruised into the second round of the Georgia High School Association playoffs. The Indians, who are now 98-2 over the last two-plus seasons, spotted rival Newnan an early 5-0 edge last Thursday in the Region 2-7A final, but proceeded to score 17 unanswered runs to win 17-5, and capture their 10th straight crown. East Coweta then swept Woodstock by a combined score of 22-1 in the best-of-three first round of the state tournament on Tuesday, and will host Mill Creek this coming Wednesday in a rematch of last year’s state final won by the two-time defending titlist Indians.

Two teams — Oklahoma’s Silo and Nebraska’s Omaha Marian — joined the rankings this week after continuing their stellar play. Silo (36-3) captured three more games to run its win streak to 16, while Marian (17-5) has won 11 straight since a Sept. 19 loss to No. 2 Papillion-LaVista.