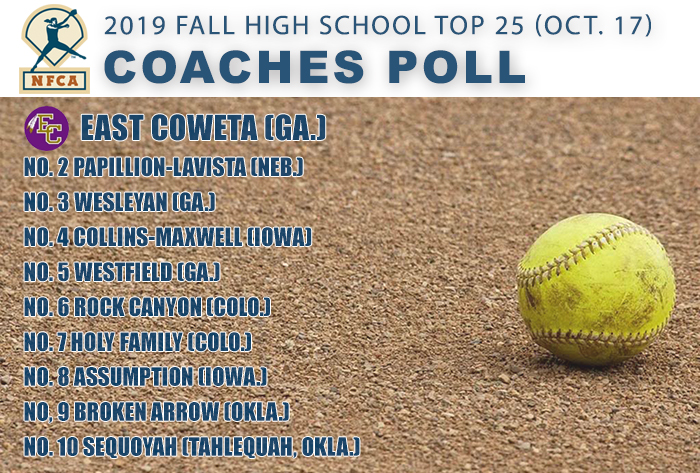 Two-time defending state champion East Coweta (32-0) continued its roll through the Class 7A playoffs with a doubleheader sweep of Mill Creek to return to the Georgia High School Association semifinals at the South Commons Complex in Columbus, Ga., and remain the top team for an eighth week.

No. 2 Papillion-LaVista (34-0) reached the Nebraska Class A semifinals with identical 10-0 victories over Millard West and Gretna, while No. 3 Wesleyan (28-0) routed Trinity Christian 12-0 and 16-0 in the Georgia private school Class A playoffs, needing just seven innings total to complete the two contests, and continues on the path toward a third-straight state crown.

A quartet of one-loss schools moved up one spot apiece to comprise spots 4-7, before three teams with a combined record of 120-7 round out the top 10.

Surging Colorado schools Columbine (won seven) and Grand Junction Central (won 12) worked their way in the mix this week at 12th and 16th, respectively, while Nebraska’s Beatrice (31-4) made its own debut at No. 24.

Elsewhere, Silo (38-3) and Kiowa (40-4) both moved up in the rankings after collecting Oklahoma state championships last Saturday.