Canada Defeats United States in Extras For Pan Am Gold 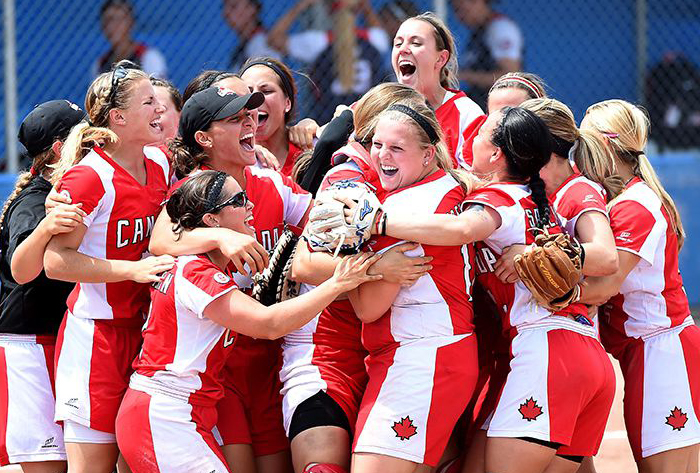 AJAX, Ontario, Canada -- The Canadian Women’s Softball Team broke the United States’ streak of seven consecutive Pan American Games Gold medals with a 4-2 win in eight innings on Sunday. The game was scoreless through seven innings of regulation play before Team Canada put up four runs in the top of the eighth and held off the Americans to win its first Gold medal at the event since 1983.

(Surrey, BC) was dominant in the pitcher’s circle once again, earning the complete game win and striking out seven batters. Erika Polidori

(Brantford, ON) led the offense with three hits, while Joey Lye

(Toronto, ON) broke the scoreless tie by knocking in the first two runs of the game with a single in the top of the eighth inning.

The game started off with both teams playing well on defense. In the first inning, both teams went down in order without getting any runners on base. In the top of the second, Team Canada went down in order again, with American pitcher Sara Nevins striking out one and getting two fly balls for the three outs. In the bottom of the inning, stellar defense by Team Canada kept the game scoreless, as Larissa Franklin

(Maple Ridge, BC) made a diving catch in centerfield for the second out followed by Lye fielding a hit in right field and throwing Michelle Moultrie out at second for the third out of the inning.

In the top of the third, Team Canada was retired in order once again, with a fly ball caught in right field and two strikeouts. In the bottom half, their defense kept playing strong and retired the United States in order with another catch in centerfield by Franklin and a pick-off at second base by catcher Kaleigh Rafter

Team Canada got its first runner on base in the top of the fourth inning when Rafter connected with a single up the middle. However, the next three batters were retired on a pair of fly outs and a ground out to leave her stranded. In the bottom of the frame, the American offence got things going by getting two runners on base with only one out, but Team Canada was able to get out of it with a leaping catch by Natalie Wideman

(Mississauga, ON) at first base for the third out.

The fifth inning remained scoreless despite a leadoff single by Polidori who was caught stealing at second base followed by a long fly ball caught in centerfield and a strikeout to shut Canada down. In the bottom of the fifth, Franklin made another great catch at the centerfield fence for the first out, followed by a strikeout and a ground out to Jen Yee

(North Delta, BC) at second base to finish the inning. Each of the sixth and the seventh innings also went scoreless, despite both teams managing to get runners on base. With the score still 0-0 at the end of seven innings, the game went to an extra inning with the international tie-breaker rule in effect.

In the top of the eighth, Megan Timpf

(Port Dover, ON) started as the runner on second base.  Wideman was the first batter to step up to the plate and hit a pop up to shortstop that was lost in the sun and dropped in, putting runners on first and second with no outs. A groundout advanced the runners and Yee stepped up to the plate but was intentionally walked. With the bases loaded, Lye hit a ball off the third baseman’s glove that rolled past the shortstop into short left field to allow both Timpf and Wideman to score for the first two runs of the game. With one out and two runners on, Rafter reached on another intentional walk to load the bases once again. A sacrifice fly to left by Jenn Salling

(Port Coquitlam, BC) extended Canada’s lead to 3-0, and Polidori singled up the middle to score Lye for Canada’s fourth and final run of the game. The United States would eventually get out of the inning with a fly ball to right field, entering the bottom half of the eighth inning with a 4-0 deficit.

In the bottom of the eighth, the United States started with Kellie Fox on second base and Haylie McCleney up to bat. McCleney reached on a walk, and both later scored on a single by Raven Chavanne to close the gap to 4-2. Despite this early attack, Canada’s defence remained strong with two outs on ground balls to Salling and Yee and Groenewegen finished the game off with a great changeup called for the third strike as Canada began celebrating its Gold medal victory.

Groenewegen earned her fourth win of the Pan American Games with eight innings pitched, giving up six hits, striking out seven batters, and allowing three walks. Team Canada produced seven hits, with Polidori racking up three of them. Rafter, Yee, Lye and Franklin would each hit one apiece.

The three Gold medals fittingly fall on the year Softball Canada celebrates its 50th Anniversary. This also coincides with 2015 being proclaimed the Year of Sport in Canada by His Excellency the Right Honorable David Johnston, Governor General of Canada.