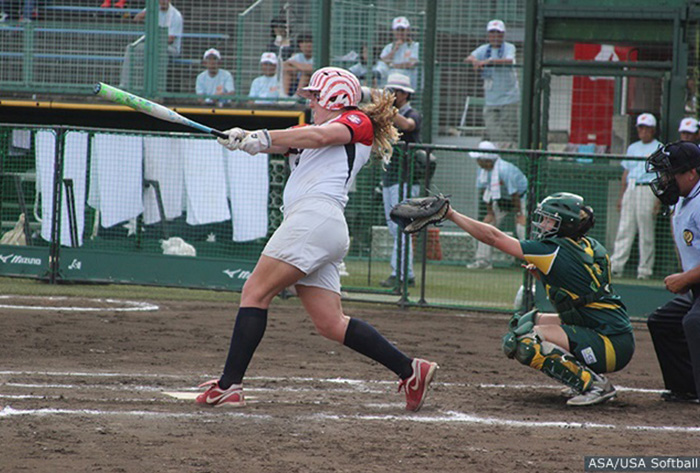 OGAKI, Gifu, Japan  — Team USA opened up play at the 2015 Japan Cup in a strong fashion as the U.S. pitching staff combined for a no-hitter in a 7-0 (six inning) win over Australia the Amateur Softball Association (ASA)/USA Softball announced today.  With the game scoreless through the first five innings of the game, Team USA tacked on seven runs during a two-out rally in the top of the sixth inning to come out on top of the Aussies.

Click here for live stats, box scores and more from the Japan Cup

"Australia played an extremely hard game today," said Head Coach Ken Eriksen (Tampa, Fla.).  "We have a very young team, so coming across the Pacific Ocean and having just two days to acclimate to the climate and time change made me extremely proud of how our team played today.  Our mentality and focus is to keep the other team at zero for as long as possible and our pitching staff and defense did a phenomenal job.  Through the first few innings we made good contact at the plate, unfortunately it was just right at them and nothing fell in.  Later in the game we had better fortune and our hits started to find the gaps."

It was a close contest throughout the majority of the game as both the U.S. and Australian pitching staff's kept the game scoreless through the first five innings of play.  Australia's Kai Parnaby retired the U.S. side in order in the top of the first inning while Team USA's defense and a strikeout by starter Jessica Moore (Sutter, Calif.) ended the first inning with the game tied at zero.  The U.S. would get their first base runner of the game in the top of the second inning with a leadoff walk to Valerie Arioto (Pleasanton, Calif.) and a one-out single from Michelle Moultrie (Jacksonville, Fla.), but a strikeout and a great snag on a line drive by Kellie Fox (San Diego, Calif.) quickly ended Team USA's early scoring opportunity.

Jaclyn Traina (Naples, Fla.) entered the game in relief for Moore in the bottom of the fourth inning and issued a leadoff walk before coming back strong with a strikeout to keep the runner at first.  Janelle Lindvall (Stevenson Ranch, Calif.) recorded the second out of the inning after gunning the ball down to Fox to catch the runner on a stolen base attempt and a groundout to Lauren Gibson (Pasadena, Md.) to keep the Aussie's off the board.

The U.S. exploded for seven runs off seven hits during a two-out rally in the top of the sixth starting with a triple from Arioto, who came around to score off a double from Amanda Chidester (Allen Park, Mich.) to plate the first run of the game.  With Chidester on second, Moultrie collected her second hit of the game with a hard chopper over the first baseman to plate the second run of the inning.  A walk to Gibson put two runners on for Fox, who singled to center field to bring around Moultrie.

The scoring didn't stop there as Sam Fischer (Simi Valley, Calif.) hit a shot to the third baseman for an infield single to load the bases before a walk to Bianka Bell (Tampa, Fla.) brought in run number four for the Eagles.  Kelsey Stewart (Wichita, Kan.) collected two RBI on a line drive to right field and the final run of the inning would come around to score off a single from Sierra Romero (Murrieta, Calif.).

Needing just three outs to close out the game via the run-rule, Ally Carda (Elk Grove, Calif.) entered the circle for the U.S.  Down to their final at-bat, Australia would get a leadoff walk but a popup and two groundouts ended the game with Team USA taking the 7-0 (six inning) win.

Moore earned the win for the U.S., pitching the first three innings of the game with two strikeouts and two walks.  Traina collected two strikeouts and two walks through her two innings of work while Carda finished up the game with one walk in one inning pitched.  Parnaby collected the loss for Australia, issuing seven hits and five runs through five and two-thirds innings.Team USA returns to action tomorrow against host country Japan at 3 p.m. JST (1 a.m. CST) followed by a 6 p.m. JST (4 a.m. CST) game against Chinese Taipei.  Live stats will be available throughout the Japan Cup and fans at home can follow along with recaps and more at ASAUSASoftball.com