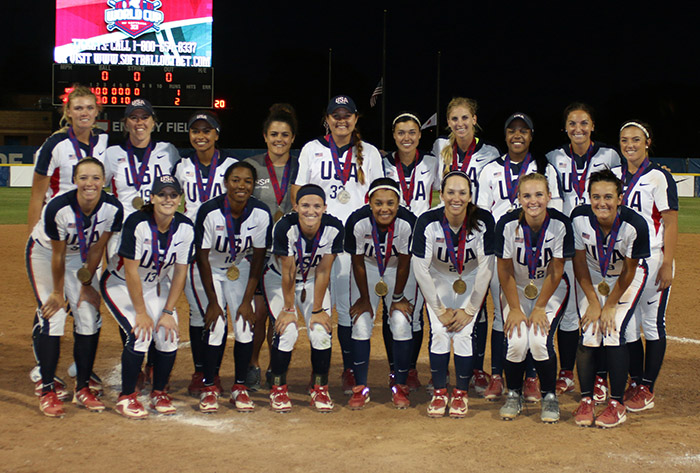 OKLAHOMA CITY –  One run proved to be the deciding factor in both the Gold and Bronze Medal games at the World Cup of Softball XI as Japan edged the USA Softball Women’s National Team, 2-1 for the Gold, while Australia earned a 4-3 victory over USA Softball's Women’s Elite Team to earn the Bronze.

It was a typical USA vs Japan ballgame, as one run proved to be the difference in the Gold Medal finale at the World Cup of Softball XI as Team USA fell 2-1 to Japan.

“You take a look at what we did, and what the USA Elite did, and you can see the future is bright for USA Softball,” said Head Coach Ken Eriksen (Tampa, Fla.).  “I was very proud of the fact that we had young kids step up this week, we didn’t panic and sometimes the difference between a Gold and Silver is a fingernail.  I think when you take a look up and down our lineup, everybody can hit it well.  We’ve got rookie pitchers out here that are moving in the right direction.  I can’t wait for us to get to the Worlds and get started.”

Team USA (pictured) struck first in the top of the first inning as Haylie McCleney (Morris, Ala.) reached on an error and came around when Kelsey Stewart recorded a standup RBI double.  Japan responded in the bottom of the frame. After a leadoff walk to Yu Yamamoto,   USA’s starter Jaclyn Traina (Naples, Fla.) retired the next two with a pair of popups. However, back-to-back singles brought Yamamoto home to even the contest at 1-1.

Both Team USA’s and Japan’s pitching staff’s kept the offenses off the base paths through the bottom of the third when Yamamoto reached on a fielding error.  Retiring the next batter with a ground out, USA opted for a pitching change as Delanie Gourley (Lakeside, Calif.) entered the circle.  After a walk put two runners on, McCleney made a beautiful diving catch in center field to pick off the runner at second for a double play.

The bats were silent for both sides until the bottom of the fifth when Japan plated what proved to be the game-winning run. Two singles and a hit batter loaded the bases.  Following another diving catch by McCleney, Hitomi Kawabata tagged up and scored to give Japan the 2-1 lead.  After a hit batter loaded the bases, Ally Carda (Elk Grove, Calif.) entered the circle and issued a strikeout to end the rally.

Down to their final at-bat, Team USA looked to get a rally going as Valerie Arioto (Pleasanton, Calif.) singled with one out. After loading the bases with one out, a pop up and strikeout ended the the U.S. rally.

“In the last couple of weeks that we’ve been together we’ve continued to grow upwards,” said Arioto.  “We’ve gotten a lot of information on what we need to do the next time we face Japan, so even for the World Championships we’re that much more connected as a unit.  It was a tough loss, but we’ll be better for it in the long run.  I’m looking forward to the next few weeks with this time and to see what we can do.”

In a tightly fought game, that saw the lead switch hands all the way down to the final at-bat, between the USA Softball Women’s Elite Team and Australia, the Aussies pulled off a 4-3 triumph to earn the Bronze.

“The team hit the ball well, it just comes down to whoever plays the best at the end,” said Head Coach Tairia Flowers.  “This team can swing the bat, and now they’ve gotten the chance to see how international softball is.  We have some really talented girls.  They’re young, they’re excited and they want to get better.”

The Aussie’s capitalized on a USA Elite error to open the scoring the bottom of the first. A two-out miscue put a runner on first and she immediately advanced to second on a passed ball. Chelsea Forkin brought her home with a RBI double. The Aussies added to their lead in the bottom of the second, stringing together a pair of singles after a two-out walk.

The USA Elite tied up the game in the top of the third inning as Allexis Bennett (Corona, Calif.) started with a single.  After swiping second, Lorenz doubled to bring Bennett home.  Entering as a pinch runner for Lorenz, Morgan Zerkle (Milton, W. Va.) came around to score on an RBI single from Fischer to make it 2-2.

Entering in relief in the bottom of the third, Paige Lowary (Grimes, Iowa) retired the Australia offense through the bottom of the fifth before the Aussie’s punched in another run to regain the lead.  A leadoff walk and a double plated Janie Blackman, giving Australia the 3-2 advantage.

The lead didn't last for long as Madeline Jelenicki (Santa Clarita, Calif.) blasted her third home run of the World Cup of Softball to once again tie the game in the top of the sixth.

Heading into the bottom of the seventh, Australia loaded the bases after Lowary opening the frame with a strikeout. A fielder’s choice with one out to Madilyn Nickles (Merced, Calif.) at shortstop prevented the winning run to score. However, Taylah Tsitsikronis drew a hard earned walk after a back-and-forth duel with Lowary for the walk-off, Australian win.

With the loss, the USA Elite finished the World Cup of Softball XI with a 4-2 record and fourth place finish.  Bennett had the hot bat, compiling a .500 (9-for-18) batting average with two home runs, seven RBI and eight runs scored.  Lowary led the pitching staff, compiling a 1.43 ERA and 11 strikeouts in 14.2 innings of work.

“Japan and Australia are some of the best teams in the world and we competed with them,” said Fischer.  “The thing about our team, is anyone can get the job done.  We were young, with many of us having our first taste of international softball, but the confidence was there.  I’m proud of the way our team played, and how we played together throughout the week.  I’m excited about the future of this team.”