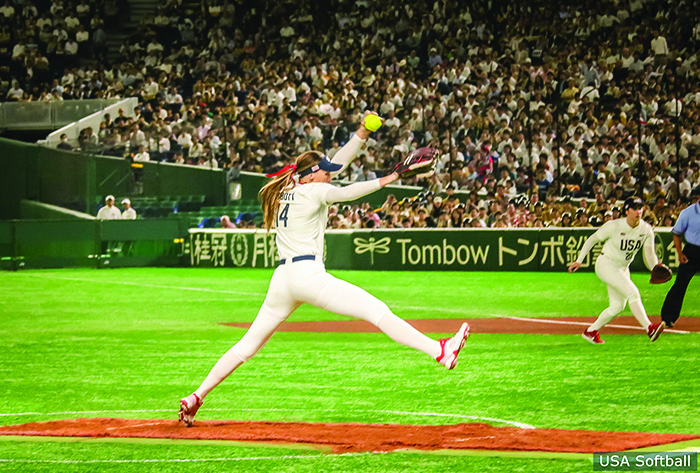 TOKYO - Before a crowd of 20,331 fans, Japan walked off with a 1-0 eight-inning win over team USA in the finale of the Japan All-Star Series at the Tokyo Dome. With the game scoreless through regulation play, the winning run crossed the plate on an executed squeeze bunt in the bottom of the eighth and gave Japan the series.

The teams split the first two contests in Sendai with Japan taking the opener, 6-4, and the U.S. evening the series with a 7-2 triumph.

In the finale, pitching and defense were the name of the game as only five hits were dispersed between the two teams. Japan's Yamamoto Fujita went the distance, tossing a two-hit complete-game shutout. She struck out 11 and and walked five.

The U.S. used four arms on the evening. Monica Abbott started and over three innings, struck out three, walked one and allowed one hit. Keilani Ricketts and Ally Carda combined for one punchout and one hit allowed over 1.2 innings. Cat Osterman, who suffered the defeat, surrendered an unearned run on one hit with four strikeouts and two free passes.

Haylie McLeney and Janie Reed each singled for Team USA, while Mori Sayaka, Saki Yamazaki and Minori Naito registered base knocks for Japan.

USA Softball was the first to threaten, loading the bases with one out in the third. However, Fujita induced a double play to end the threat.

Both teams put a pair of runners on base in the sixth inning, but could not come up with the big hit.

In the top of the eigth, the U.S. put runners on the corners with no outs and after a groundout had two runners in scoring position. Following a walk to Valerie Arioto loaded the bases, a strikeout and a fly ball squashed USA Softball's rally.

With a runner on third and one out, Mori dropped down perfect bunt to score Haruka Agatsuma with the winning run.

Kelsey Stewart drove in the first run of the game with a two-out RBI single in the second. Delaney Spaulding upped the lead to 3-0 with a two-run shot in the third.

Japan quickly evened the score in the bottom half of the third. With two outs, a wild pitch put Japan on the board and a two-run single to rightfied by Yuka Ichiguchi knotted the game up at 3-3. Back-to-back two-out home runs in the bottom of the fourth put Japan up for good. Yu Yamamoto broke the deadlock with a two-run blast and Sayaka Mori followed with a solo long ball.

Team USA got one run back in the top of the fifth on a RBI groudout by Michelle Moultrie, but could not muster any more offense the rest of the way.

Misaki Katsumata pick up the win in relief. She allowed a run on two hits in two innings of relief. Carda suffered the defeat, allowing four runs on thiree hits with a strikeout and two walks over two innings of work.

A seven-run second inning provided all the offense as team USA defeated Japan, 7-2, in game two to even up the series.

Aided by five walks and a hit batter, the U.S. put up its seven-spot. Shelby Pendley, Reed, Spaulding and Moultrie each provided run-scoring base hits, including Moultrie's two-run double to cap off the frame.

Team USA will return to action at the USA Softball International Cup, which will be held July 1-7 in Columbus, Ga. at South Commons Softball Complex, the site of the 1996 Olympic Games for softball, where the sport made it’s Olympic debut. A complete game schedule, ticket information and live streaming/ESPN schedule can be found at USASoftballInternationalCup.com.