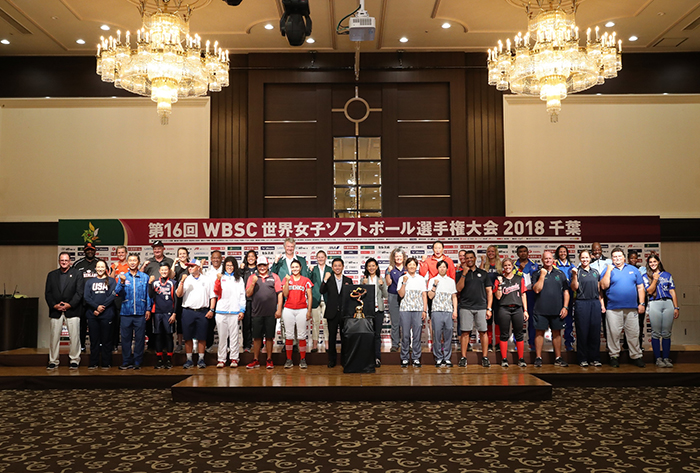 The Championship was officially declared open as 16 teams were present at NASPA Stadium for the Opening Ceremony, in front of a huge crowd that fully packed the venue.

WBSC Softball Chairman, Tommy Velazquez, said: “This is the most important softball event in the last ten years. During the coming days the best players in the world will battle not only For the Title of World Champions, but also to fulfill their life-long dreams of becoming an Olympic Athlete. At the end of the World Championship one of these 15 visiting nations will join Japan as the first qualified for the next Summer Olympic Games softball competition. The Road to Tokyo 2020 officially begins today.”

“Millions of little girls around the world will be watching you and dreaming on becoming the softball stars of the future”, added Velazquez. “Show them the passion for the game, inspire them, keep the softball growing and growing around the globe”.

Prior to the opening ceremony, National Team captains and coaches from 16 countries and territories across six continents (Africa, Asia, Europe, North and South America and Oceania) as well as many members of the media gathered at the official pre-event press conference on the eve of the opening ceremony.

WBSC Secretary General Beng Choo Low said: “This is not just any World Championship, it’s the first qualifier to the 2020 Olympic Games.”

The premier global softball tournament in the world — the WBSC women’s softball flagship event — is the first of five qualifiers for the Olympic Games Tokyo 2020. The top finisher in Chiba, not including already qualified/host Japan, will be part of baseball and softball’s historic Olympic return at Tokyo 2020.

Following the opening ceremony, the National Teams of Japan and Italy will play each other in Game 1 at 8:00 p.m. (1:00 a.m. ET). All nations will be in action on Friday, August 3.

The Women’s Softball World Championship will be played across 73 games in 10 days. The Final will be held on Sunday, August 12 at 7:00 p.m. local time (midnight ET), at ZOZO Marine Stadium. All the games will be available to watch around the world

, on TV or via live-stream.