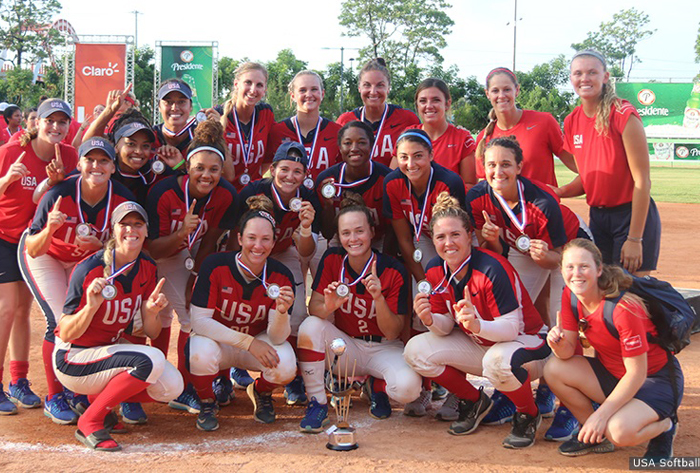 Santo Domingo, Dominican Republic — Two days after nearly being eliminated from the Pan American Championship, the USA Softball Women’s National Team (WNT) bounced back and dominated the final day with a pair of run-rule victories. After dropping the opening medal round game, the U.S. won its final four contest to claim the Gold.

Behind Kelly Barnhill's no-hitter, the reigning champs knocked off Mexico in 9-0 (5) on Sunday in the title game. Her performance nearly mirrored Cat Osterman's perfect game twirled in the 2003 Pan American Games against Canada nearly 14 years ago to the day on the very same field.

Earlier in the day, the U.S. defeated Canada 11-3 (5) to advance to the Gold Medal Game for a rematch with Mexico, who’s extra-inning win over the U.S. in the first round of playoffs sent the Americans to the loser’s bracket to battle their way back.

“Unbelievable,” said head coach Ken Eriksen.  “I think it’s the first time in double-page system that a team has lost the first game and then won four-in-a-row to win the tournament.  We needed a wakeup call.  I don’t know if anyone realized that we were at the brink of elimination over the course of the next four years because of the way the system is setup.  This team took it upon themselves and they got in a groove.  We had really good pitching and defense yesterday to carry through and it made the hitters more comfortable.  Michelle Moultrie, Amanda Chidester, Valerie Arioto and Jess Moore did an incredible job in leadership.  I was here the last time Team USA won a Gold Medal on this field when Cat Osterman pitched a perfect game and Kelly Barnhill almost matched her today.  History repeats itself here in Santo Domingo.”

Barnhill got the start and retired the first three batters she faced. After hitting the first batter of the second innng, she retired the final 12 to earn the victory. Barnhill fanned 10 and did not walk a batter.

The U.S. bats came alive during a nine-run outburst in the bottom of the second  Ali Aguilar put the Red, White and Blue on the board with a two-run bomb to centerfield. Following a pitching change, Janie Takeda sent a first-pitch, three-run home run over the centerfield fence to extend Team USA’s lead to five runs.

The U.S. continued to pounce offensively scoring the final four runs with two outs thanks to an error that extended the inning. Amanda Chidester plated Kelsey Stewart and put runners on the corners.  On a 3-1 pitch, Valerie Arioto hit a no-doubter, over the leftfield fence for the third home run of the inning.

“I was really excited going in to today,” said Barnhill.  “For us to win Gold on this field like so many of the Olympians before us is amazing.  It’s something that I’ve been dreaming of, to be like those Olympic pitchers, and to be on that path that they were once on is really special because we’re all on the same path in the end.”

In the victory over Canada, the United State bounced back from a three-run deficit after the first inning with 11 unanswered runs. Moultrie shined at the plate for Team USA, going 3-for-4, including a three-run home run which put the U.S. up in the top of the fourth inning.

Each U.S. batter recorded a hit in the win over Canada, while Jessica Moore  earned the win after entering in relief in the top of the first inning.  Moore tossed four and one-third scoreless innings with one strikeout, two hits and one walk.  Danielle O’Toole got the start in the circle for the U.S. while Barnhill tossed the final out of the game.

With their backs against the wall, the United States accomplished what no other team has been able to do in the history of the event.

“It would have been so easy to just fall apart after that loss,” said Arioto.  “It just shows our closeness and how we believe in each other and each person’s heart.  We did it as a unit.  That loss could have really set us back, and we said ‘No way, we’re fighting.’  We fought every single pitch.  It wasn’t every single game, it was every single pitch.  The world saw our heart there, we just laid it out and played some good softball.”

Up next for Team USA is the Japan Cup, which will be held August 25-27 in Takasaki City, Japan.  It will be a battle of the top-four ranked teams in the world as No. 1 Japan, No. 2 USA, No. 3 Canada and No. 4 Australia are all slated to compete.

Fans can follow along with the USA Softball National Team programs all year long at USASoftball.com