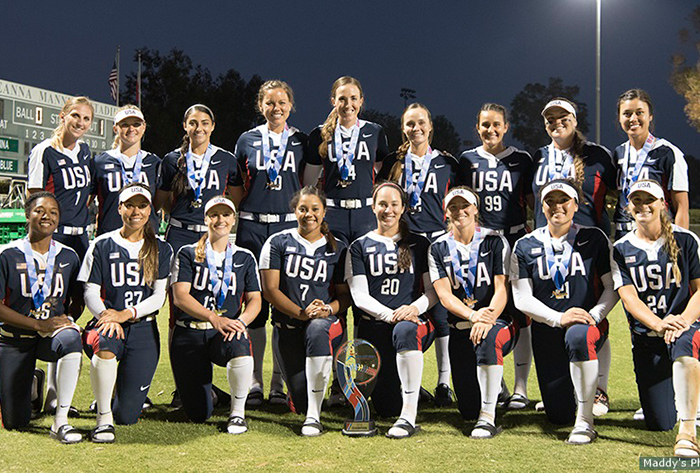 Valerie Arioto launched three of USA Red's six home runs, drove in five and scored four runs as USA Red topped Japan, 10-5. It marked the first time since the 2013 Canada Cup that a U.S. team had put 10 runs on the board against Japan and won.

USA Red got on the board early for two runs, all with two outs.  Back-to-back walks to Kirsti Merritt and Kasey Cooper put two on for Michelle Moultrie, who recorded an infield single to plate Merritt, while a throwing error by the Japan defense allowed Cooper to score.

Japan struck back in the top of the second inning to cut USA Red’s lead to one run on a RBI groundout.

Arioto led off the bottom of the third with her first home run of the game. Two batters later, Delanie Spaulding launched a solo long ball of her own to make it 4-1.

Japan made it a one-run game as it plated two after a pair of singles and a walk allowed two runners to cross the plate. Aguilar responded in the bottom of the fourth with the third USA Red home run of the game, pushing its lead to 5-3.

A two-run round tripper by Japan in the top of the fifth tied up the game at five runs each. That didn't last long as as USA Red took the lead for good in the bottom half of the frame.  Arioto started the rally with her second home run of the game and then Moultrie followed suit with a solo home run.

With the Red, White and Blue leading by two heading into the bottom of the sixth, a three-run blast from the bat of Arioto sealed the 10-5 win for USA Red.

Monica Abbott earned the win after entering in the top of the fifth inning.  Abbott finished the contest with four strikeouts with one earned run allowed, while starter Danielle O’Toole fanned one batter in her 3.1 innings in the circle.  Rachel Garcia and Keilani Ricketts both saw time in the circle with Garcia striking out one batter.

In addition to Arioto’s five RBI, Moultrie also had a multi-RBI game with a 2-for-3 outing.

Hannah Flippen continued her hot-hitting ways, driving in the first run of the game with a single in the bottom of the third to drive in Kelly Kretschman. Amanda Chidester drove in the second run of the inning after reaching on a fielder’s choice, and a squeeze play at the plate by Bubba Nickles allowed the third run of the at-bat to score.

China took the lead in the top of the sixth after a double plated two runs before a two-run home run gave China the 4-3 edge.

Down to their final at-bat and trailing by one, USA Blue forced the game into extra innings after Chidester singled with one out.  With runners on the corners and two outs, Mo Mercado delivered with a RBI single through the left side left side, eveing the contest at 4-4.

With the international tie-breaker (ITB) in effect, China quickly plated two runs after back-to-back doubles.  Delanie Gourley, who started the game in the circle for USA Blue, re-entered the game and quickly fanned the next three batters.

Kretschman drove in the first run of the eighth with a hard one-out RBI single through the left side before a wild pitch allowed Bates to score tying run.  Nicolette Udria followed with the game-winning RBI single up the middle to plate Kretschman.

The win over China concluded the 2018 international season for USA Blue as the team finished with a 6-4 record, having competed at the Japan All-Star Series this past June.