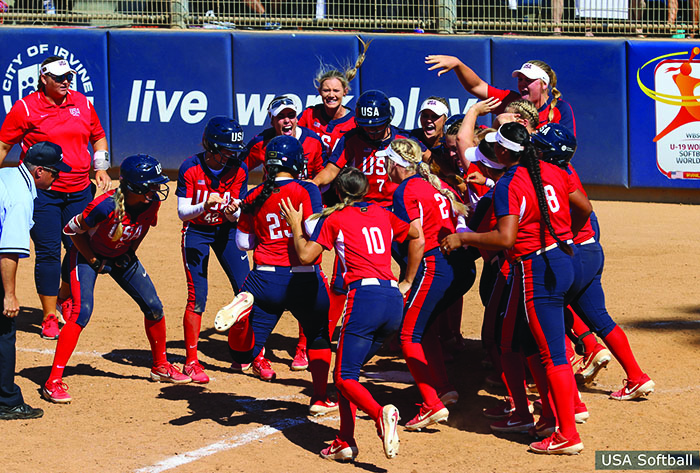 “It’s something I will never forget,” Megan Faraimo said. “Just the sheer resiliency of this team and the durability is something that I have never experienced before and to come back and win a ball game like this against one of the best teams in the world says a lot about the character of this team.”

“This team deserved an opportunity to have a game like this,” U-19 WNT Head Coach, Heather Tarr said. “What an amazing team that Japan has this year. Every inning was a fight and a battle and every inning it was so hard to score runs off of their pitching and their defense.”

In the eighth inning, the teams entered international tie breaker play and Japan scored quickly on a double to leftfield to bring home the runner placed on second. Japan followed with a single to left, driving in another run to make it a 2-0 ballgame. An error by Skylar Wallace allowed for another runner to score and give Japan the 3-0 lead. Montana Fouts entered in relief and recorded the final out of the inning.

Trailing 3-0 with Bailey Dowling on second base, Jadelyn Allchin hit a leadoff single to move Dowling to third. Frankie Hammoud entered the game as a pinch hitter and sent the third pitch of her at bat over the left field fence to tie the game 3-3.

“When I was walking up to the box all I was thinking was that we just need a small base hit,” Hammoude said. “Coming home to my teammates after tying the game was an indescribable feeling and I couldn’t wait to touch home.”

With two outs, Charla Echols roped a triple to deep centerfield to keep the inning alive and put the winning run 60 feet away. After going down 0-2 early in her at bat, Jasmine Sievers singled on a ground ball bobbled by the shortstop scoring Echols for the game winner.

“This is a dream come true,” Faraimo said. “I used to dream about this moment, so it means a lot. It is such an honor and it feels even better to do it with a group of girls that I really love.”