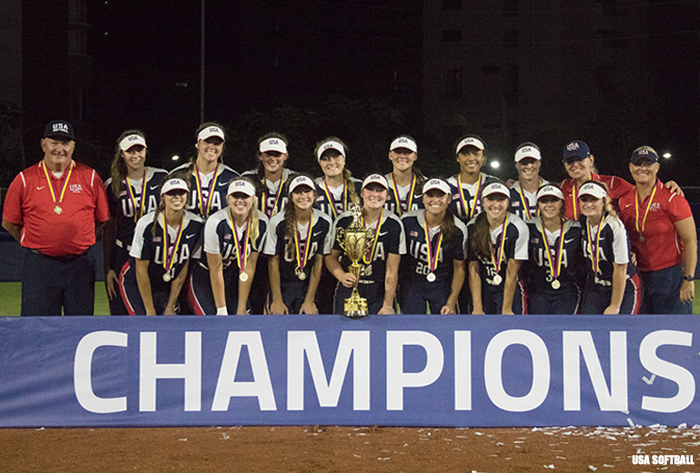 Barranquilla, Colombia — Becoming the first-ever U-17 Women’s Pan American Championship gold medalists, the USA Softball U-17 Women’s National Team (WNT) finished the tournament with a perfect 8-0 record after defeating Mexico, 2-0, in the finale Saturday night at Edgardo Schemel Stadium. Caitlynn Neal went the distance in the circle for the Red, White and Blue, allowing just two hits in her seven innings of work. Offensively, the U-17 WNT plated two runs off six hits with Avery Hodge and Hallie Wacaser collecting two apiece.

“I am speechless and truly blessed by the opportunity to get to know each of these amazing young women,” said head coach Kyla Holas. “They are the future of this sport and represented their country with outstanding class. They accomplished something as a team that will be with them for the rest of their lives. Thanks to all for making this an amazing experience.”

In the third, Hodge singled up the middle with one out. After stealing second, she sprinted home with the first run of the game after Maddie Gallagher knocked her in with base knock to rightfield. After the throw home, Gallagher advanced all the way, third but was left stranded after a fly out and strikeout signaled the start of the fourth inning.

The US added another run in the fourth. Wacaser led off with a triple and scored on Tieley Vaughn's RBI singlel.

Ahead 2-0 after four innings, the U.S. defense continued to work as it sat down the side in order two more times in the fifth and seventh innings to secure their eighth victory.