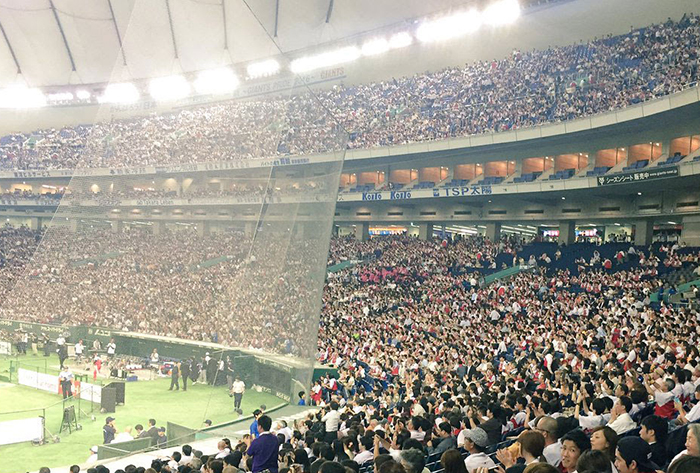 In a battle of top-ranked women’s national teams, the United States and Japan recently completed a three-game All-Star Series in Japan, which included the series-opening contest in front of 31,448 fans at the Tokyo Dome.

It was the first time a softball event was held at the historic facility as both teams made their final preparation for the 2016 WBSC Women’s World Championship next month in Surrey, Canada.

The WBSC-sanctioned three-game series moved to Sendai after game one for the remainder of the series. It marked the first international softball event in Sendai since the Great East Japan Earthquake of 2011.

A four-run fifth broke a 1-1 deadlock and lifted Japan to the 5-1 win. The four runs came in the bottom half of the frame a half inning after Team USA tied the contest.

Japan got on the board early in the bottom of the first, scoring a run off three straight singles. Team USA evened the game courtesy of a Kelsey Stewart sacrifice fly.

In the bottom half of the fifth, a two-run single broke the 1-1 tie and a two-run home run extended Japan’s lead to 5-1.

Yamato Fujita earned the win for Japan, giving up a run with two strikeouts and two walks. Jessica Moore suffered the defeat, surrendering five runs and fanning three in 4.2 innings.

The U.S. threatened in the top of the sixth. It would load the bases with one out, but a popup and fly out to left  to kept team USA from bringing in additional runs.

Japan scored two runs in the top of the eighth, while Yukari Hamamura and Fujita combined to shut out Team USA and pick up the win in game two of the series.

With the international tiebreaker in effect, Mana Atsumi started on second, and with one out scored on a sacrifice fly. Misato Kawano followed with a triple and Nozomi Nagasaki drove her in with a double off of Ally Carda, who reentered after Kawano’s triple.

Fujita picked up in the win in relief, tossing two innings of shutout ball with four strikeouts. Delanie Gourley suffered the loss, allowing two runs, one earned, on one hit with a punchout in two innings.

Behind the hot bat of WNT veteran Valerie Arioto, Team USA claimed a 5-1 win over Japan.  Arioto went 2-for-3, driving in three runs, including a two-run home run in top of the fifth inning to help the U.S. clinch the series finale.

The U.S. broke the scoreless deadlock with a three-run third. Stewart crossed the dish with the first run of the game, utilizing her speed to score from second on a bunt single by Ali Aguilar. Arioto and Bianka Bell knocked in the second and third runs with RBI singles.

A two-out error allowed Natsuko Sugama to score an unearned run for Japan in the bottom half the third.

The Red, White and Blue extended its lead to 5-1 courtesy of Arioto’s two-run blast to centerfield.

-- Courtesy of ASA/USA Softball and WBSC