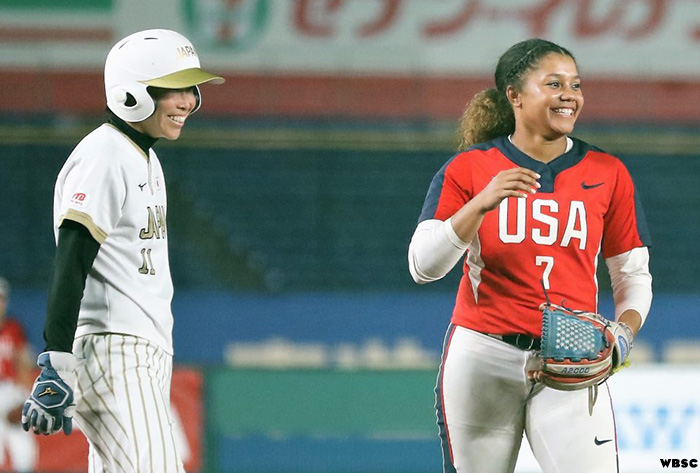 CHIBA, Japan -- The United States repeated as Softball World Champions and secured a berth into the 2020 Olympics following a memorable finale against the host team. In front of almost 12,000 fans at ZOZO Marine Stadium, Team USA defeated Japan, 7-6, on a walkoff single by Kelsey Stewart in the tenth inning.

With softball making its return to the Olympic Games in 2020, the Red, White and Blue will join Japan who automatically qualified as the host country, while additional qualifiers will determine the rest of the six-team field.

Team USA battled until the very end and proved to the world that resiliency pays off, as Kelsey Stewart drove in Michelle Moultrie in the bottom of the 10th inning to give the U.S. a 7-6 victory over Japan. With the win, the U.S. claims its 11th title at the World Baseball Softball Confederation (WBSC) World Championship and finishes with an undefeated 10-0 record.

“It was another great game (against Japan),” said head coach Ken Eriksen in the postgame press conference. “If something comes out of this game besides the fact that we came back and won, it would be that it was against a true warrior in Yukiko Ueno. For her to go out and throw 17 stressful innings (including Japan’s earlier game against Canada) was amazing to watch if you’re a softball fan.”

Japan made the first move, striking first in the second inning after plating a run off a RBI single by Haruka Agatsuma. In the third, Japan’s Saki Yamazaki singled with two outs before crossing home on a RBI triple by Yu Yamamoto. Trailing 2-0, Team USA answered back in the bottom half and took the lead on a two-out three-run shot by Spaulding to make it 3-2.

With the international tie-breaker (ITB) rule in effect, the teams traded RBI singles in the eighth off the bats of Japan’s Misato Kawano and USA's Moultrie.

After a scoreless ninth, Yu Fujita's two-run long ball gave Japan its third lead of the game, 6-4 setting up Team USA's thrilling three-run rally in the bottom half to win it. Spaulding drove in the first run with a RBI single and with runners at the corner, Aubry Munro's ground rule double notched the game at 6-6. With the winning run on third, Stewart laced one down the third base line to bring home Moultrie and clinch the World Championship title for Team USA.

Team USA’s pitching staff of Abbott, Barnhill, Garcia, O’Toole and Ricketts performed in the circle, with Abbott earning the win after striking out two, walking two and allowing one hit in her two innings of work. McCleney, Moultrie and Spaulding led the offense with two hits apiece, with Spaulding collecting four RBI including her three-run home run.