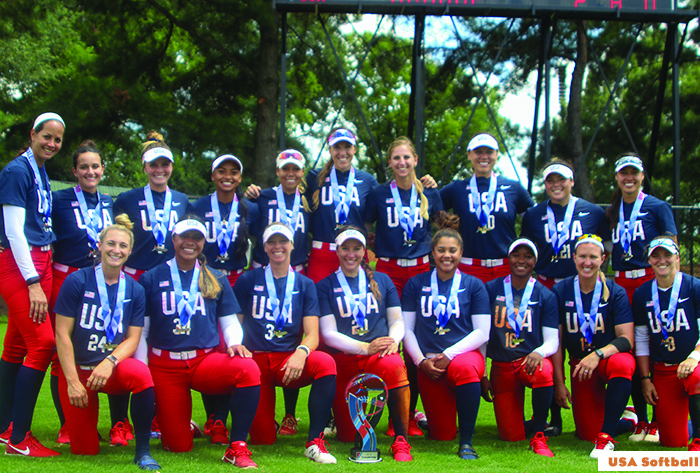 COLUMBUS, Ga. - In an ESPN-televised showdown, Team USA rallied from a one-run deficit in the bottom of the sixth to defeat Japan, 2-1, and capture its second straight USA Softball International Cup title. Additionally, it was a historic day for the U-19 WNT program, who took home the bronze medal for the first time program history, with a 8-0 triumph over Scrap Yard Fastpitch.

In their fifth meeting of the 2019 season, it was Team USA who came out on top in a closely-contested battle against world-ranked No. 2 Japan. Timely hitting, strong pitching and stellar defense were put on display by the Americans, who outhit their international rivals in the 2-1, comeback win.

“When you have No. 1 and No. 2, it always comes down to the last play,” said USA Softball WNT Head Coach, Ken Eriksen.  “We’ve been on the good side a few times and we’ve been on the other side a couple times. It’s always nice to be the team who gets the last shot. This team is patient, we don’t panic, and we understand the grind of preseason with just getting back into the flow with reps.”

In the cruicial sixth inning, the offense took advantage of a pair of walks, along with a RBI single and sac fly, to grab the lead. Ali Aguilar drew a leadoff walk and moved to second on an infield single by Michelle Moultrie before scoring on Delaney Spaulding's run-scoring single. A walk to pinch-hitter Sahvanna Jaquish loaded the bases for Haylie McCleney, who drove a ball to leftfield, which allowed Moultrie to tag up and score the would-be winning run.

In the top of the seventh, Monica Abbott entered and retired Japan in order to earn the save. Cat Osterman, Ally Carda and Abbott combined on a two-hitter. Carda picked up the win, striking out three in three scoreless innings of relief work. Osterman started a tossed the first three frames, recording six punchouts.

A leadoff home run by Japan’s Yu Yamamoto in the top of the second put Japan up 1-0. Team USA had several opportunities in the early innings, but was not able to capitalize until the sixth.

At the plate, Spaulding was 3-for-3 with a RBI. McCleney continued her hot-hitting ways, going 2-for-3 with an RBI.

The WNT will take a brief hiatus before reuniting in Lafayette, La. and then traveling to Houston, Texas for exhibition games and training against Scrap Yard fast Pitch. From there, the team will head to Lima, Peru for the Pan American Games.

“This team played the game the right way – as a team,” said U-19 WNT Head Coach, Heather Tarr. “Everyone played a huge role in our success this week, and that’s what we’re going to need as we head into the World Cup later this year. The question now becomes how good can we get?”

The U-19's offense opened things up early with Dowling's first longball coming with two outs in the first for a quick 3-0 lead. Dowling doubled the advantage to 6-0 with her second round tripper in as many at bats, a shot over the leftfield fence.

The U.S. capped off the scoring with a pair of runs in the fourth on a fielding error and fielder's choice groundout.

Faraimo earned the win in the circle, her third of the tournament, with four strikeouts and two hits, while Kilfoyl struck out two and allowed one hit in two innings of work. Aside from Dowling, Jayda Coleman and Jasmine Sievers each picked up a RBI.

The U-19 WNT will reunite in Spartanburg, S.C. for exhibition contests and training at the USA Softball Junior Olympic (JO) Cup in preparation for the World Baseball Softball Confederation (WBSC) U-19 Women’s Softball World Cup in Irvine, Calif.