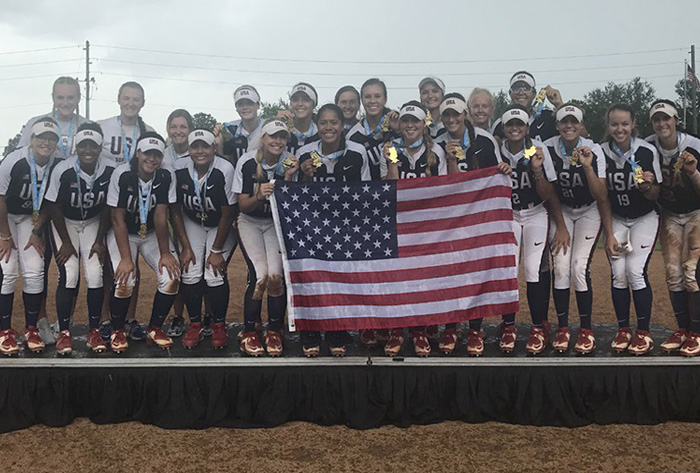 “For them to start here in January (Junior Women’s National Team tryouts) and end here in July, it’s great to come full circle,” said Head Coach Laura Berg. “I am proud of how they came together. Although the team was chosen in January, we didn’t start practicing together until June. Two months isn’t a lot of time but it was like they knew each other and knew what they were capable of doing. They all knew there was one goal and that was winning gold.”

Bubba Nickles launched a three-run home run to put the Red, White and Blue up, 3-0 in the top of first. With the long ball, Nickles broke the  WBSC Junior Women's World Championship record for home runs with her sixth.  Japan would answer back with three runs of their own off a two-run double by Eri Shimoyama and RBI single by Hiroyo Hattori to tie the ballgame.

Japan would jump ahead in the bottom half of the second after a single from Reina Matsumoto brought home Miyu Miyamoto, while Fujimoto was caught at home by a perfect throw from centerfield by Hannah Adams to keep the score, 4-3.

Trailing 4-3 heading into the fifth, the U.S. would regain the lead with its five-run inning. Adams led off with a single to center field before a two-out home run by Baylee Klingle made it 5-4. Lou Allan and Jessica Harper followed with a pair of singles before coming home off a three-run shot by Alissa Dalton, extending the U.S. lead to 8-4.

Nickles went on to break another JWWC record in the top of the sixth inning after picking up her 29th RBI of the WBSC Junior Women's World Championship after bringing home Adams and Bates on a two RBI double to center field to make it 10-4. Japan was retired in order for the third straight inning after Lugo issued a pair of strikeouts and a groundout went Klingler’s way to catch the runner at first.

Holding a 10-4 lead, the U.S. capped off its scoring with three more runs in the seventh which included RBI single by Nickles (her 30th) and Klingler.

Lugo earned the win in the circle for the U.S. with five innings of shutout ball, striking out five and allowing four hits. In addition to Nickles home run and RBI record, she also set a batting average (.690) mark, going 20-for-29. As a team, the USA Softball JWNT broke the JWWC home runs record with 15.

“It’s not just about coming out and staying strong, but adjusting to whatever good teams, like Japan, bring our way,” said Nickles. “To play a sport since I’ve played since I was little was really awesome and shows that the love of the game is all across the world. (Having softball back in the Olympics) is a huge milestone and I really feel like this is going to motivate so many more girls in the U.S. to play international, in the 2020 Olympics and beyond.”

“I think we adjusted really well,” said Klingler. “When we would get knocked down, we got right back up and kept going defensively and offensively. Japan is a very good team but it’s the game of softball. We all put in long hours all for this moment right here and we pulled through.”

Team USA will have some time off before ending the season competing at the Major League Baseball (MLB) RBI World Series in Cincinnati, Ohio on August 10. Follow along with Team USA all year long at USASoftball.com