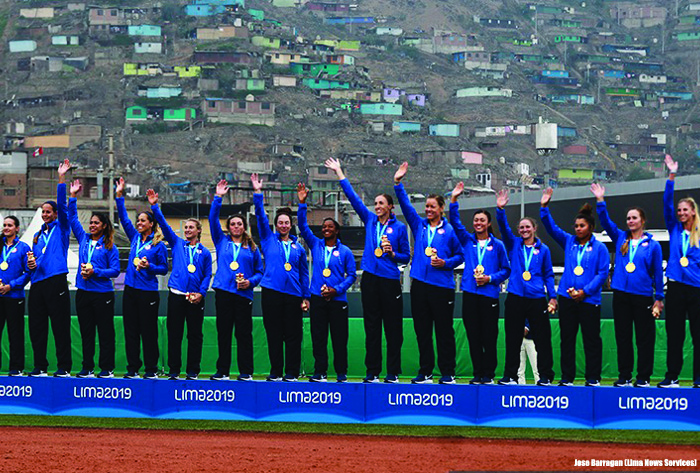 Fighting through the Bronze Medal finale, Team USA defeated Puerto Rico 3-1 to set up a rematch with No. 3 Canada. Monica Abbott went the distance in the circle for Team USA, earning both wins with two complete-games under her belt, while Aubree Munro and Michelle Moultrie lifted the offense in both wins.

“Monica Abbott put the team on her back today,” said WNT Head Coach, Ken Eriksen. “She threw 14 innings, two complete games…she was a bulldog. All her training, both her physical and mental training, paid off when it needed to today. I was very impressed with the maturity level of the team. We didn’t let the little things get to us. We might not have been the most comfortable at the plate. We might not have been the most comfortable coming through the Bronze Medal Game to capture the Gold, but the one thing we were was steady in our emotions. That bodes well.”

Abbott earned her third and fourth wins of the Pan American Games, allowing just two runs to cross the plate through 14 innings of work and striking out 21 batters. She tallied a tournament-leading 48 strikeouts in 28 innings pitched over the week with a 0.75 ERA.

“It was great to see us come out and win the Gold,” said Abbott. “We knew we had to come out and beat Puerto Rico, which we knew was going to be a tough game. That was our path to get a chance for the Gold again against Canada, who gave us a tough time yesterday. I’m really just proud of this team and how we came together, both offensively and defensively, and made plays when we needed to.”

The WNT will take a 10-day break before reuniting at the Marine Corp Air Station (MCAS) in Iwakuni, Japan for training prior to the 2019 Japan Cup. The annual event will take place August 30-September 1 in Takasaki City, Japan where Team USA will compete alongside No. 2 Japan, No. 6 Chinese Taipei and No. 15 Czech Republic.

With the game tied at one run apiece through five and a half innings, Team USA used a two-run sixth inning to take the lead and claim the 2019 Pan American Games Gold with a 3-1 victory over Team Canada.

Abbott had another strong showing in the circle, limiting Canada to just four hits and one run through seven innings. At the plate, Moultrie’s bat came alive as the Team USA veteran recorded a home run in the second inning and game-winning RBI in the bottom of the sixth.

Abbott and Canada’s defense kept the game scoreless through the first three at-bats of the game until Moultrie blasted a two-out solo home run on the first pitch she saw to give Team USA an early 1-0 lead.

Canada tied up the ballgame in the top of the fourth inning with a solo home run with two outs and threatened again in the top of the fifth. A leadoff single and hit batter put two on with one out, but a pair of strong defensive plays got the US out of the inning unscathed. A diving catch by Haylie McCleney in centerfield kept the runners at bay and it was followed by a heads up play by Ali Aguilar to tag the runner going to second base on a ball up the middle.

Team USA looked to score in the bottom of the frame after Stewart singled and McCleney walked, but a groundout and strikeout kept it a tied ballgame.

In the bottom of the sixth, Valerie Arioto and Delaney Spaulding recorded back-to-back singles to put two on for Moultrie, who broke the deadlock with a RBI single to right field and give Team USA a 2-1 lead.

“It was great that Val and Delaney got our offense started by getting on base before me to give our team a chance to get a run,” said Moultrie. “Coach Eriksen gave me the hit away sign, so I just went up there swinging.”

With two outs in the sixth, a mishandled throw by the first basemen allowed Spaulding to safely score an insurance run.

Canada led off the seventh with a single, but a strikeout and fly ball quickly put two outs on the board. An infield single put the tying run on base, but Abbott regrouped and fanned the final batter to secure the victory.

Moultrie and Spaulding each had 2-for-3 outings at the plate in the win with Moultrie driving in two runs. Abbott struck out 10 batters in her second outing of the day in the circle, allowing just four hits through seven innings.

“Aubree came out a couple times [to the circle] and she told me she believed in me and that the team was here for me,” said Abbott when asked how she bore down during her two outings in the circle in one day. “She was pumping confidence into me and I just tried to pitch with that heart and passion that she was giving to me.”

Team USA led the Pan American Games in nearly every statistical category. As a team, the squad hit .311  throughout the week, outscoring opponents 45-6. The pitching staff combined for a 0.81 ERA, striking out 87 batters and capturing four shutout wins.

Abbott led tournament with a 4-0 record and 48 strikeouts in 28 innings of work. McCleney had a monstrous week at the plate, leading all batters with a .609 (14-for-23) batting average, a 1.043 slugging percentage and nine runs scored. McCleney also finished tied atop the leaderboard with Spaulding in home runs with three each while Spaulding’s 11 RBI led the tournament. Kirsti Merritt also finished with a tournament-leading three stolen bases.

The WNT earned a spot in the Gold Medal contest of the Pan American Games with a 3-1 win over Puerto Rico in the Bronze Medal game. After Puerto Rico got on top early with a solo home run in the top of the second inning, the U.S. responded with a pair of their own to take the lead and never look back.

Rachel Garcia started the offense for Team USA in the bottom of the second with a leadoff double and advanced to third on a single from Merritt. Merritt stole second, but a strikeout kept the runners at bay until Munro singled to plate two runs and give the Red, White and Blue a one-run lead.

The 2-1 score held until the bottom of the fourth inning when Janie Reed singled to bring Merritt in and make it a 3-1 ballgame.

Offensively, Merritt reached base in each appearance at the plate while scoring twice with Munro picking up two RBI and Reed driving in one. Abbott limited Puerto Rico to just three hits in seven innings, while striking out 11.