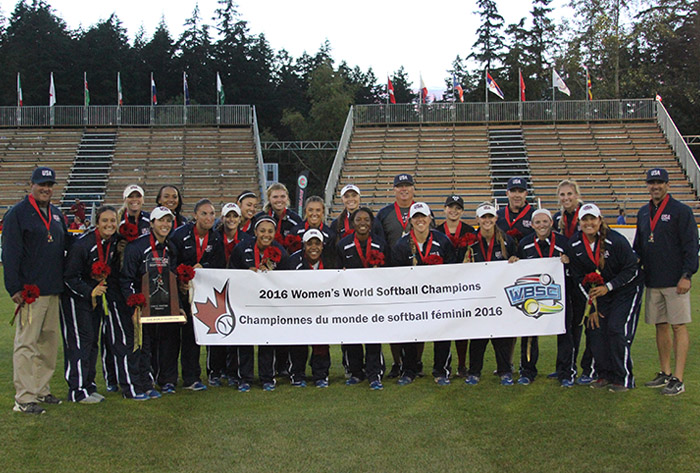 “The team bought into what we’re trying to do,” said Head Coach Ken Eriksen (Tampa, Fla.).  “We haven’t won a World Championship since Venezuela in 2010.  To be able to do this after battling in 2012 with a brand new team, in 2014 with a brand new team and this time with a staff that has had a few World Championships under their belt speaks volumes.  They earned the right to play in this game.  I told them before the game ‘You earned the right, and that’s what our goal has been.  Now that you earned the right, do something about it.’  I watched them play today, and you look at those 18 athletes and it’s a maturing moment.  With this group, the Elite Team and the coaches we have in the program, it’s going to be an exciting future for USA Softball.”

The U.S. struck big in the top of the first inning, scoring four runs on a two-out rally.  Jazmyn Jackson (San Jose, Calif.) led off with a double to right field and after a walk to Valerie Arioto (Pleasanton, Calif.) put two runners on, Ali Aguilar (Orangevale, Calif) stepped up and grounded an RBI single back up middle for the first run of the game. A batter later, Michelle Moultrie (Jacksonville, Fla.) stepped up with a three-run shot over the right field fence to make it a 4-0 USA lead.

Japan would respond in the bottom of the first with a run on RBI a single from Eri Yamada.

Team USA added three insurance runs in the top of the fourth inning.  Delaney Spaulding (Rancho Cucamonga, Calif.) led off with a single and advanced to second on a single from Aubree Munro (Brea, Calif.).  This prompted a pitching change for Japan, as Yamata Fujita entered in relief for Yukari Hamamura.  On a 2-0 pitch, Hayley McCleney blasted a three-run shot, giving the U.S. a 7-1 edge.

Japan responded in the bottom of the fourth with a solo home run off the bat of Yuka Ichiguchi and cut the deficit to 7-3 with another solo long ball in the fifty by Misato Kawano.

Moore earned the win in the circle for the U.S., pitching two and two-third innings with one run, two strikeouts and four hits allowed.  Carda finished the game with one strikeout, two runs and two hits in her two innings of work, while Traina issued one hit and one run in one inning.  Gourley closed out the game with one strikeout and one hit in one and a third innings in relief.  Hamamura suffered the loss for Japan, lasting just three and a third innings with seven runs and seven hits allowed.

“I’m so proud of this team,” said Arioto.  “It was so exciting getting to that Championship Game, and everyone contributed in some way.  Throughout the week, we’ve all played for each other.  This team is a family.  We sacrifice for each other and get things done.  It was great to get the result we wanted, and all our hard work has paid off.”

Team USA will have some time off before returning to Japan for the Japan Cup, which will be held September 2-4 in Takasaki, Japan.  Follow along with Team USA all year long at ASAUSASoftball.com