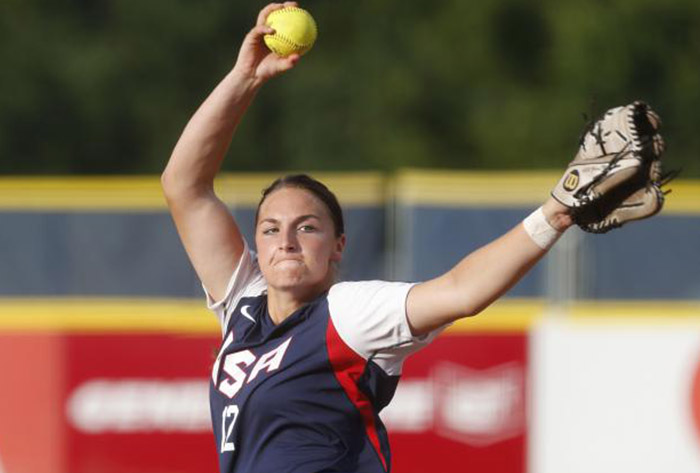 IRVINE, Calif. – The USA Softball Women’s National team defeated No. 2 seed Japan 6-1 to win the World Cup of Softball X Championship on July 5 in Irvine, Calif. The U.S. finished with a 7-1 overall record. This was the seventh time that Team USA has played Japan in the Championship, with the USA improving to 5-2 in those games. This win marked the eighth time that Team USA has been crowned the World Cup of Softball Champions. The Junior National team clinched fifth place at World Cup X on Sundayafternoon with a 6-5 win over Mexico.

Team USA beat Japan 6-1 in the Championship game at the World Cup of Softball X in Irvine, Calif. Team USA came out with something to prove in the first inning, as Amanda Chidester (Allen Park, Mich.) brought in two RBI with a huge triple. The defense and pitching was excellent for both teams the next few innings. Saki Yamazaki put Japan on the board in the top of the fourth inning with a home run. Team USA tacked on three more runs in the sixth inning, as Janelle Lindvall’s (Stevenson Ranch, Calif.) double put the game away.

“Defense and pitchers did great,” said Chidester. “It was a great team win today. It was huge to get the international experience out here before we head to the Pan American games. It gives our young team a lot to take away moving forward.”

Jessica Moore (Sutter, Calif.) got the win for Team USA, going four and one-third innings and allowed only one run. Sara Nevins (Pineallas Park, Fla.) gave up no hits in relief of Moore. Kasumi Hirahara took the loss for Japan, lasting only one inning and gave up three runs.

“We always talk about winning the first inning defensively and offensively to get us off to a good start, said Ken Eriksen (Tampa, Fla.) head coach of Team USA. “Jessica Moore did a phenomenal job of getting some of the best batters in the world out in the first inning. I also thought Janelle did a great job catching the whole game. All her hard work also paid off with the big hit late in the game to help us clinch it.”

Valerie Arioto (Pleasanton, Calif.) helped out in different ways, finding her way onto the bases and scoring twice without having a single hit.

In the second game of Championship Sunday, the USA Juniors defeated Mexico and finished in fifth place with the win at the World Cup of Softball X. Mexico came out strong, scoring five runs in the first four innings. The Juniors were struggling and down by four runs until Madilyn Nickles (Merced, Calif.) brought home Nicole DeWitt (Garden Grove, Calif.) in the fourth inning. Getting the second run on the board ignited a spark for the Juniors. The Juniors took control of the game in the fifth as they were able to string together several hits. Astin Donovan (Guilford, Conn.) surprised Mexico with a quick bunt that resulted in a huge inning in which three runs were scored to tie the game.

Zoe Conley () came into the game and was lights out for the Juniors, earning the win and allowing only one hit. Nickles was huge again in today’s game as she has been throughout the entire tournament, getting on base three times in the game, while also bringing home two RBIs.

“I came into the game and just gave it my all, said Conley.” “I’ll do anything for this team and I’m just glad that I could contribute to this big win.”

The Juniors finished 4-4 this week at the World Cup of Softball X, beating Mexico twice.

“I think our girls learned a lot this week,” said Tairia Flowers (Tuscon, Ariz.) head coach of the USA Juniors. “We struggled at the beginning of several games, but we have a bunch of tough girls and I think that’s why we come back when things aren’t looking good for us. We have a lot of room to improve, as we prepare for the Junior Women’s World Championship next month in Oklahoma City.”