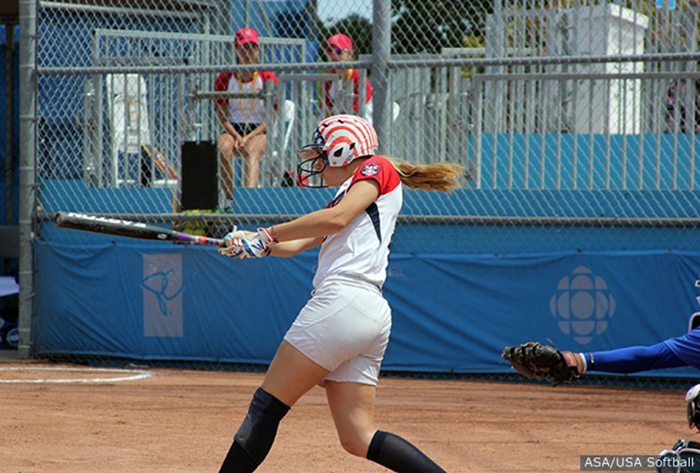 TORONTO -- Team USA closed out the preliminary rounds of the Toronto 2015 Pan American Games with an 11-0 (four innings) shutout win over the Dominican Republic.  Team USA utilized the long ball as Kellie Fox (San Diego, Calif.) sent two out of the park, while Sierra Romero (Murrieta, Calif.) also notched a home run as the U.S. combined for 10 hits through the four-inning contest.

Jaclyn Traina (Naples, Fla.) got the start in the circle for the U.S. and established her dominance early after retiring the side in order with three-straight strikeouts.  During their first appearance at the plate, the U.S. started a two-out rally as Kelsey Stewart (Wichita, Kan.) showcased her speed on the base path with a triple.  Team USA would then get runners on the corner as Valerie Arioto (Pleasanton, Calif.) was hit by a pitch before Stewart scored the first run of the game on a dropped third strike.  Romero became the second hit batter of the inning to load the bases for Janelle Lindvall (Stevenson Ranch, Calif.), who ripped a standup triple down the left field line to collect three RBI.  One batter later, Fox sent her first ball out of the park for a two-run home run to give the U.S. a 6-0 lead after one complete inning.

Traina and Team USA's defense took care of business in the top of the second inning to bring the explosive U.S. offense back to the plate.  Stewart led off the at-bat with a single and moved to second on another hit by pitch to Arioto.  Chidester singled to plate Stewart from second base before Romero connected for the long ball with a three-run home run.  The scoring did not stop there as two batters later, Fox blasted out her second home run of the game to give Team USA the 11-0 lead.

That score would hold through the remainder of the game after Sara Nevins (Pinellas Park, Fla.) entered the circle in the top of the third and closed out the game with four strike outs and two ground outs to give the U.S. their fifth-straight run-rule victory of the Pan American Games.

Traina earned the win for the U.S. with both pitchers striking out four batters through two innings apiece.  For the offense, the Eagles were led by Fox, Romero and Lindvall who picked up three RBI apiece while Stewart finished with a 2-for-3 performance at the plate with two runs scored.