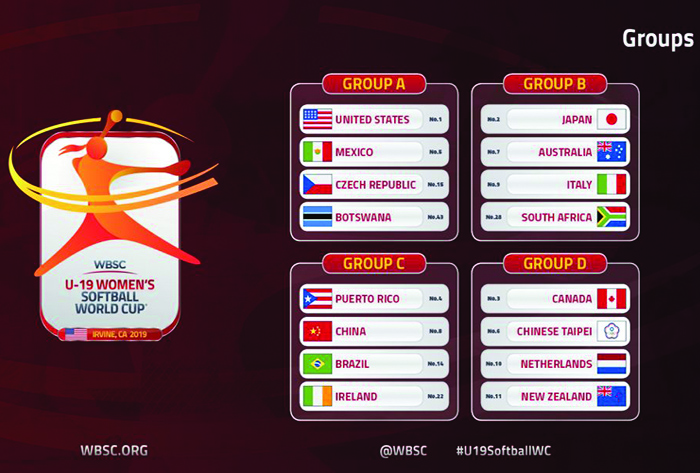 The World Baseball Softball Confederation (WBSC) revealed the groups and tournament schedule of the XIII WBSC U-19 Women’s Softball World Cup, being staged from August 10-17 in Irvine, Calif.

The 16 participating nations have been drawn into four groups:

The three-day, 24-game Opening Round, will be played from August 10-12, with two games on Day 1: host USA will play against Mexico following the Opening Ceremony, while Puerto Rico and Brazil will meet to open the action in Group C.

The top two teams of each group after the opening round will advance to the Super Round, while the bottom two teams will play the Placement Round. On August 17, the two Super Group nations with the best overall records will play in the World Championship Final, while the third- and fourth-place nations will play for bronze.

Online ticket sales have launched, with single passes for the eight days of competition available. Daily tickets are valid for the day’s competition across both fields. Fans around the world can purchase tickets here.

The broadcast and live-streaming schedule will be announced in an upcoming news release.