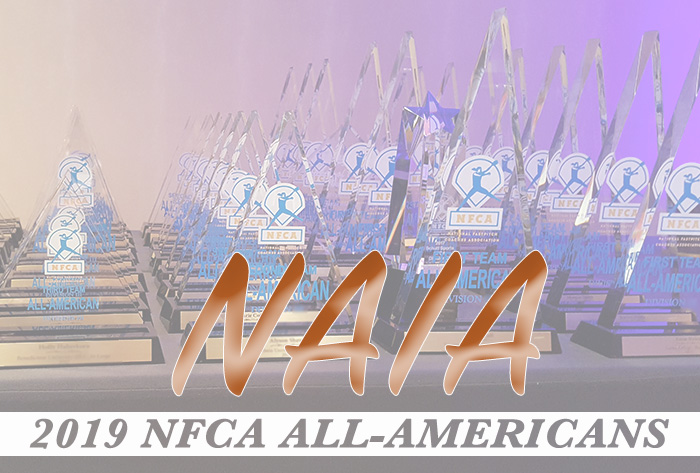 For the third consecutive season, OCU’s All-American Jaci Smith was selected Diamond Catcher of the Year, while her teammate Kennedy Jackson was tabbed the New Balance/NFCA Golden Shoe Award.

Garnering first-team accolades for the Stars is Smith, Jackson and Baileigh Loux. A three-time first-team NFCA All-American, Smith posted NAIA single-season records with 129 RBI and 114 runs scored to along with 29 doubles, 28 homers, a 1.047 slugging percentage and .580 on-base percentage. Jackson, who swiped 57 bases, finished with 107 runs, second all-time in a NAIA single season. The sophomore also recorded 112 base hits, third most in a NAIA single season, with a .477 batting average, 10 doubles, 35 RBI, .541 on-base percentage and .907 slugging percentage. Loux, a sophomore outfielder, was fourth on the Stars with a .425 batting average. She recorded 76 hits, 20 doubles, 10 homers, 61 RBI and 74 runs scored.

Southern Oregon’s Gabby Sandoval and Baker University’s Olivia Brees make up the first-team pitchers. Sandoval was pivotal in the Raiders’ first NAIA national title, recording a 36-4 record, the most victories in a NAIA single season since 2013. The junior hurler posted a 1.19 ERA with 15 shutouts and 207 strikeouts in 252 innings of work. She held her opposition to a .189 batting average and earned three saves. Brees posted an 35-3 overall mark and led the nation with 449 strikeouts, which topped all three NCAA and NJCAA divisions. She finished her career with 1,302 strikeouts. The Heart of America Athletic Conference Pitcher of the Year recorded an ERA of  0.73, third lowest in NAIA, and six saves.

Oregon Tech senior designated player Ali Graham captured a first-team honor after she led the Owls with a .418 batting average, 89 hits and 20 doubles. The Cascade Conference Player of the Year ranked second on the squad with 12 home runs and 56 RBI.

Cerny captured her second straight first-team honor as an at-large pitcher. The sophomore hurler posted a 33-4 record, 1.15 ERA and 12 shutouts. Cerny fanned 298 batters and held her opponents to a .164 batting average. Stotts, a freshman utility player, was named Crossroads League Player and Newcomer of the Year. She hit .460 and knocked in a team-best 57 runs. Stotts also led the Knights with 19 doubles, seven triples, 54 runs scored and a .635 slugging percentage.