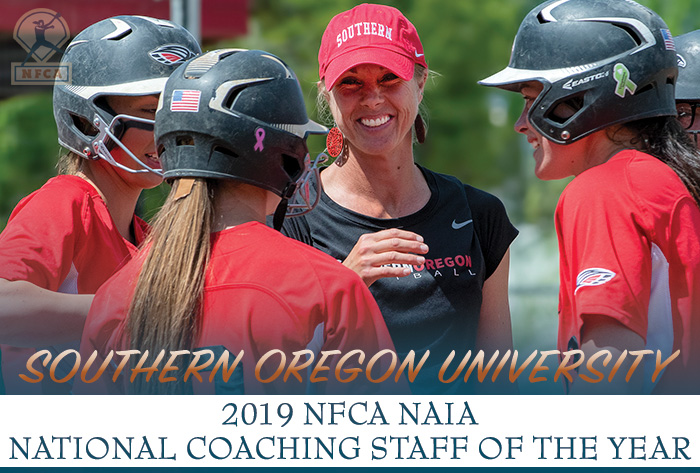 LOUISVILLE, Ky. – Coming off the program’s first NAIA national title, Southern Oregon University head coach Jessica Pistole 2019 and her staff have been voted by their peers as the 2019 NFCA NAIA National Coaching Staff of the Year, the Association announced Wednesday afternoon.

The Raiders earned the right to host during the NAIA Opening Round and took full advantage sweeping their way into the NAIA World Series. The momentum continued as SOU won its first three games before Oklahoma City forced an if-necessary title tilt, which after an eight-hour rain delay, the Raiders came out on top 8-3 for their first national championship.

Under Pistole’s direction, the Raiders enjoyed a 25-1 mark at the friendly confines of University Field, and endured consecutive losses just once all season. In five years at the helm, Pistole has skippered SOU to 219 victories, including 149 the last three seasons, setting program marks for wins in each of those years.