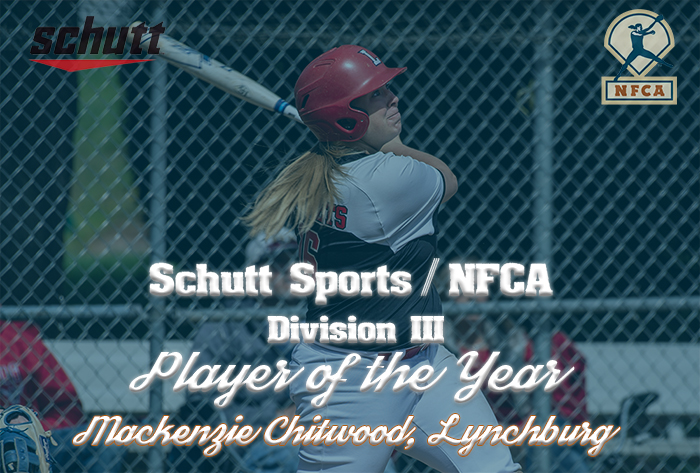 LOUISVILLE, Ky. — The NFCA is pleased to announce that University of Lynchburg senior first baseman Mackenzie Chitwood has been chosen as the 2019 Schutt Sports/NFCA Division III National Player of the Year.

Chitwood, who was a first-time NFCA All-American this season as the first team first baseman, is a two-time NFCA All-Region selection (2016 and 2019), and the single-season (21) and career (44) record holder in home runs for the Old Dominion Athletic Conference. She is also a two-time all-conference selection.

She had a walkoff homer in the 12th inning of Lynchburg’s NCAA opener, a 6-5 win over Manhattanville, and helped the Hornets capture the regional — and earn herself Most Outstanding Player honors — by hitting three homers in a pair of wins over two-time national champion Virginia Wesleyan on the final day. Lynchburg’s season ended in the NCAA super regionals against eventual national runner-up Emory.

The Schutt Sports/NFCA Division III National Player and Pitcher of the Year award recipients are selected by NFCA’s All-American Committee, which includes a representative from each of the eight NCAA Division III regions.

2019 — Mackenzie Chitwood, 1B, University of Lynchburg