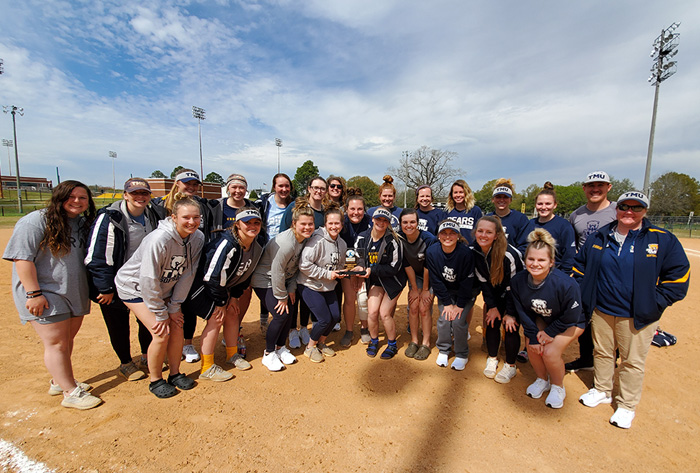 COLUMBUS, Ga. –Truett McConnell was crowned the 2020 NAIA Leadoff Classic champion as the tournament concluded on Sunday afternoon at the South Commons Softball Complex. The Bears, along with Mobile, each finished 4-1, but Truett McConnell earned the title courtesy of run differential.

In a battle of two 3-1 teams, Truett McConnell defeated Georgetown, 10-2 in five innings. After falling behind 2-0 in the top of the first, the Bears answered with four in the bottom half and went on to score 10 unanswered for the victory. A two-run single by Liz Bunton tied the game at 2-2 and Katherine Kozlowski broke the deadlock with an RBI double. Truett added four more in the third and ended the game with two in the fifth.

The last two runs proved to be the difference as the Bears recorded a plus-12 in run differential. The Rams finished with a plus-11. Run-rule games are capped at an eight-run difference.

Mobile closed out its 4-1 showing in a big way, blanking Rio Grande 11-0 in five innings. The Rams recorded nine hits led by Jaden Morace, who was 3-for-4 with a triple and three RBI. Allison Vincent and Lindsie Sanders each scored three times. Sanders also doubled twice and knocked in two runs.

In a pitcher’s duel, Thomas More edged Reinhardt, 1-0 to cap off its tournament at 2-3. Annika Gels twirled a three-hit shutout for the Saints with six strikeouts and Elana Harrison led off the fifth with a home run for the only offense. Gels struck out the side in the first and, with a runner on second and two out in the seventh, she fanned the pinch hitter to secure the victory. Allie Andriano was the tough-luck loser as she surrendered a run on two hits. She recorded seven strikeouts and walked one. Olivia Jacobs recorded two of the Rams’ three hits.

Thomas captured a win in its final game at the Leadoff, rallying past Rio Grande, 7-6. The Night Hawks erased a 6-3 deficit and took the lead for good thanks to a six-run sixth. A two-run double by Tivia Clintt and a two-run single by Addison Mauldin were the key hits in Thomas’ big inning. The RedStorm scored three in the third and two more in the fourth take the three-run lead.

Lawrence Tech held off a seventh-inning rally to defeat Southeastern in its final game at the Leadoff. The Fire made it 3-2 and had the tying run on second but Blue Devil hurler Alex Cherney induced a pop up to third to preserve the win. Cherney fanned 10 to earn the win.

Paige Alt went 4-for-4 with a grand slam keying Coastal Georgia to a 5-1 victory over Campbellsville. The big blow came in the top of the third when Alt sent one over the left field fence for a 4-1 lead. They would tack on one more for the final margin. Hayley Dickerson went the distance for the Mariners. She allowed a run on five hits with six strikeouts and one walk.

In the final game of the tournament, Alexa Good tossed a five-hit shutout leading Georgia Gwinnett to a 4-0 triumph over William Carey. Good received all the runs she would need in GGC’s two-run first. An RBI single by Piper Wagner knocked in the first run and the second scored when Wagner was in a rundown. Wagner finished 3-for-3 with two doubles and an RBI. Good fanned six and walked one.