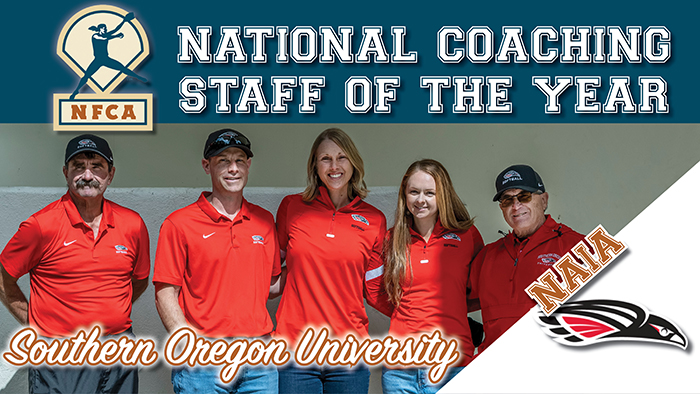 LOUISVILLE, Ky. – Coming off the program’s second consecutive NAIA national title, Southern Oregon University head coach Jessica Pistole and her staff have been voted by their peers as the 2021 NFCA NAIA National Coaching Staff of the Year, the Association announced Thursday afternoon.

The Raiders, the No. 1 overall seed in the postseason, earned the right to host during the NAIA Opening Round and swept St. Katherine and No. 11 Hope International twice to reach the NAIA Softball World Series.

In Columbus, Ga., the Raiders had to be resilient. Following a win in their opener, SOU fell to CCC rival College of Idaho. The Raiders proceeded to win five straight elimination games, including the final two against another CCC foe, Oregon Tech, in the finals. A 3-2 victory forced the if-necessary game. After Oregon Tech rallied and sent it to extras, SOU scored twice in the top of the ninth to clinch the national title.

Under Pistole’s direction, the Raiders enjoyed a 20-2 mark at the friendly confines of University Field, and endured consecutive losses just once all season (CCC Tournament). In six years at the helm, Pistole, who returned after spending 2020 at the University of San Diego, has skippered SOU to 264 victories.